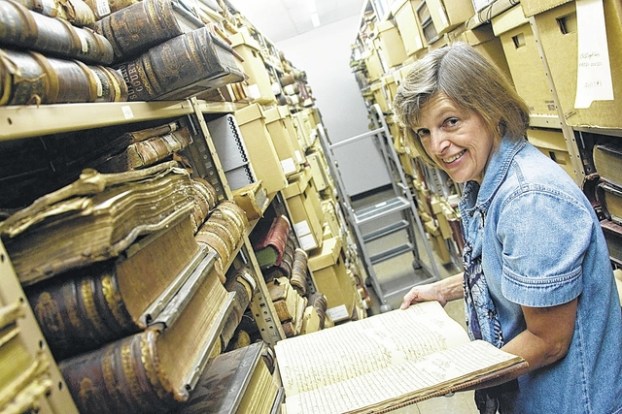 http://lagrangenews.com/wp-content/uploads/sites/37/2015/09/web1_0913FILEKayeMinchew.jpgTroup County Archives Executive Director Kay Minchew browses through some of the hard copies of archived materials at the Troup County Archives in this 2010 file photo. Minchew recently retired as executive director, a position she held for 32 years.

LaGRANGE — After 32 years, the executive director of the Troup County Archives has stepped down, but not given up her passion for history.

“I am extremely proud of all that we have been able to accomplish at the Troup County Archives since its establishment in 1983,” Minchew told the Daily News. “I am especially proud to have served as director since 1985 and pleased that we have been able to assist so many people in Troup County and elsewhere as they searched for local government records and genealogical information. It has been a pleasure to help make the Archives a national model showing what small and mid-sized governments can do when they work together to care for their records.”

Kaye Minchew’s retirement July 31 recently was announced by the Troup County Historical Society Board of Trustees.

Minchew plans to remain active as an author, archival and historic consultant, and an indexer of books. She has two books slated for publication in 2016. One focuses on President Franklin D. Roosevelt’s connection to Georgia, set to be published by the University of Georgia Press, and features photography and oral historical accounts aimed at giving a new look at FDR’s involvement with life in Georgia.

Minchew is co-authoring the second book, a guide for local government archives, with John Slate of the Dallas Municipal Archives in Dallas, Texas. It will be published by Rowman and Littlefield Publishers.

LaGrange Mayor Jim Thornton noted that Minchew’s work has been celebrated throughout the state and “many other communities see the work Kaye has overseen in Troup County as a model for how a community can and should preserve its history.”

“Kaye Minchew has provided great leadership to the community through her years of service,” Thornton said. “The Troup County Archives is an important community institution, and Kaye’s leadership has been critical in growing and maintaining the Archives, as well as the historical society, Legacy Museum and their related projects.”

In 2008, the Archives received the Council Exemplary Service Award from the Society of American Archivists.

Minchew served as a member of the board of directors of the National Association of Government Archivists and Records Administrators and testified before Congress in 2010 on behalf of the National Historical Records and Publications Commission, notes a press release from the Troup County Historical Society. Minchew currently serves as a commissioner of NHPRC and on the Georgia Historical Records Advisory Council as an appointee of Georgia Gov. Nathan Deal.

Between 2007 and 2009, Minchew oversaw renovation of the historic 1917 LaGrange National Bank building at 136 Main St. into the Legacy Museum. The renovation received an award from the Georgia Trust for Historic Preservation, according to the press release.

In 2010, the Georgia Association of Museums and Galleries also recognized The Wheels of Change permanent exhibit with its “Best Exhibit in 2010 in the over $100,000” category. In presenting the award, Jamie Credle, director of the Isaiah Davenport House Museum in Savannah and chairwoman of the awards committee, said the museum was recognized “for creating an exhibit that artistically and astutely tells the story of the people of West Georgia with inclusive content and dramatic visual impact,” according to a May 8, 2010, Daily News article. The Wheels of Change permanent exhibit also won an award of merit from the American Association of State and Local History, notes the press release.

Other achievements by Minchew, as outlined in a press release from the Historical Society:

Minchew is a fellow of both the Society of American Archivists and the Society of Georgia Archivists. During her career, she also served as president of the Georgia Archivists and chairman of the Historic Chattahoochee Commission. She received the Lifetime Achievement Award from the Georgia Historical Records Advisory Board in 2007 and the Outstanding Achievement Award from the Historic Chattahoochee Commission in 2002.

Minchew’s most recent projects include co-hosting local arrangements for the Georgia Trust for Historic Preservation’s 2012 Fall Ramble and serving as the local coordinator of the Smithsonian’s “New Harmonies: Celebrating American Roots Music” exhibit at the Legacy Museum in 2013, co-sponsored by the Georgia Humanities Council.

In the mid-2000s, she led the effort to digitize 19th century Troup County court records, which are now available at the Digital Library of Georgia. The project was funded by the NHPRC.

From 2013 to 2015, Minchew led a collaborative effort with the Downtown LaGrange Development Authority and the LaGrange Troup County Bureau of Tourism to create a modern Historic Downtown Walking Tour brochure and corresponding Walking Tour mobile app. The project was funded in part by grants from the WestPoint Fund of the Community Fund of the Chattahoochee Valley and the Georgia Humanities Council.

Under her guidance, the Troup County Archives digitized its collection of more than 25,000 photographs and loaded them onto PastPerfect Online and the Archives website at www.trouparchives.org, making the collection readily accessible to the community and researchers on the Internet.

Minchew has also been active with local civic and arts groups. Minchew coordinated the listing National Register of Historic Places listing of the Downtown LaGrange Commercial District and helped established the City of LaGrange Historic Preservation committee in 2001.

She was the first woman to become a member of the Rotary Club of LaGrange and served as the club’s first female president. She served on the Leadership Council of LaGrange College. She also serves on the board of directors of the LaGrange Symphony Orchestra and Sons of LaFayette organizations.

She may be contacted at kayelminchew@gmail.com.