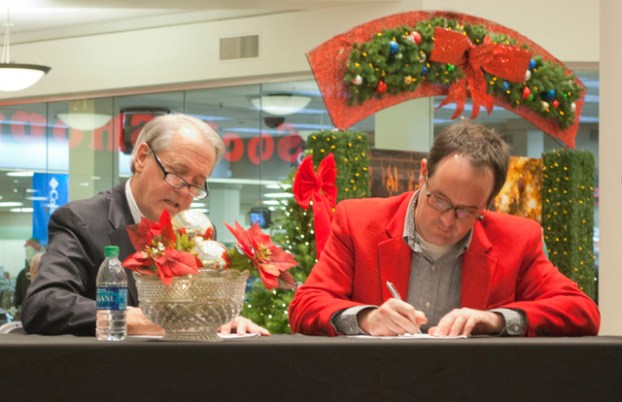 LaGrange Mayor Jim Thornton, right, signs a measure to create a tax allocation district at the LaGrange Mall during a press conference Tuesday as Jim Hull, an executive with Hull Property Group, the mall’s owner, looks on.

http://lagrangenews.com/wp-content/uploads/sites/37/2015/12/web1_WEBMallTAD.jpgLaGrange Mayor Jim Thornton, right, signs a measure to create a tax allocation district at the LaGrange Mall during a press conference Tuesday as Jim Hull, an executive with Hull Property Group, the mall’s owner, looks on.

During a press conference at the LaGrange Mall, Mayor Jim Thornton signed a tax incentive agreement to pave the way for an expansion of LaGrange Mall.

The expansion will include the addition of a fourth, 60,000-square-foot anchor store to be built on the east side of the mall and a new tenant will occupy the former JCPenney location.

Jim Hull, an executive with Hull Property Group, did say that a national sporting goods store is in the works, but declined to give specifics citing confidentiality agreements. Hull said announcements about specific store brands could be made by February.

New restaurants and outparcel retail spaces are also planned, but, again, Hull said he was unable to name names. Hull Property Group expects to spend about $15 million on the expansion and create 425 new jobs. It is funded through private investment raised by Hull Property Group.

The measure signed by the mayor, called a tax allocation district, or TAD, is projected to add more than $1 million to local coffers each year. It goes into effect Jan. 1 and was approved by City Council, the LaGrange Redevelopment Agency, Troup County Commission, Troup County Board of Assessors and Board of Education.

But the measure doesn’t come without cost.

One cent of every dollar spent in the TAD will go to Hull Property Group. That compensation is capped at $60,000 per year — $30,000 from the local-option sales tax, or LOST, and $30,000 more from special-purpose, local option sales tax, called SPLOST.

LOST was approved by Troup voters to provide property tax refunds to taxpayers. SPLOST can only be used for voter-approved projects, like emergency services and road improvements.

The education SPLOST, which is a separate, voter-approved sales tax, is not affected by the mall TAD.

The property tax breaks made possible by the TAD pales in comparison to sales tax revenue projections. For every one dollar of city, county and school taxes levied in real estate, those same taxing jurisdictions may receive as much as $14 in sales taxes, according to a study commissioned by Hull Property Group.

The mayor said he hopes the TAD will attract a variety of new retail and restaurant businesses to the mall, but stressed the city can’t strong-arm companies into coming.

“Retail recruitment has been a top priority … for several years,” Thornton said in a press release. “Although the city government cannot force any retailer to open shop in LaGrange, we can make the business environment more attractive to them.”

Owner fights back in alleged theft