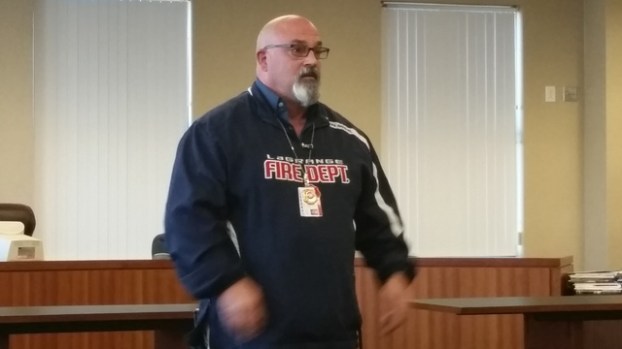 LaGrange Fire Marshal John Thomas addresses the crowd at the Homeless Coalition meeting Thursday. He said he has been scouting the city for structures that might be suitable to house warming centers or homeless shelters.

http://lagrangenews.com/wp-content/uploads/sites/37/2016/02/web1_HC2.jpgLaGrange Fire Marshal John Thomas addresses the crowd at the Homeless Coalition meeting Thursday. He said he has been scouting the city for structures that might be suitable to house warming centers or homeless shelters.

LaGRANGE — The clock is ticking for Jessica David and the 20 people who temporarily call the Emmaus Shelter at 321 Greenville St. home.

In 27 days, the nightside operations of the facility — where 20 homeless people sleep, eat and fellowship — will come to an end. LaGrange City Council voted Tuesday to deny David and the Emmaus Shelter the necessary permit to continue operating as an overnight housing unit at the Greenville Street location.

It was a crushing blow to David and the organizations, along with city and county leaders that make up the Troup County Homeless Coalition.

The group met Thursday afternoon for its regular monthly gathering and was greeted with a larger than normal crowd. Folks packed into part of the jury assembly room at the Troup County Government Center to hear how they could help solve the homeless crisis in the community.

“The time is now to come up with a solution,” Denná Muncy, president of the Homeless Coalition, told the crowd. “It’s in your backyard. You open the paper, it’s there. You look on the street, it’s there. Sometimes you may not know it. ‘Couch surfing’ is considered homelessness. No permanent structure over your head, that’s homelessness.”

“We are growing exponentially,” David said. “After the disappointing decision Tuesday night, maybe we’ve outgrown ourselves too fast.”

LaGrange Public Safety Chief Lou Dekmar also addressed the crowd. He said his departments are committed to helping people stranded on the streets and working with the homeless coalition and shelters around town.

“… We’re looking at doing something in the immediate short term, getting folks through this winter so folks are taken care of, then look to the long term,” he explained. “Single women and children and single men; those are the three areas we need to address.”

LaGrange Fire Marshal John Thomas said he has been riding around town looking for suitable structures to house a potential warming center.

He stated an adequate size would be 3,000 square feet and centrally located in the city.

A building “may hold 50 to 75 people as a warming station,” he stated. “But for it to be considered as a homeless shelter, it would have to be able to house 200 … obviously it needs to be heated and preferably have running water.”

Dekmar said the police and fire departments would be willing to work with property owners.

“We can’t break the law, but we can help folks come into compliance with the law,” he stated.

Two other organizations also offered their services as emergency warming centers when the weather turns cold.

Representatives from Fellowship Deliverance Ministries at 207 W. Mulberry St. and the Ark Refuge Ministry at 504 E. Depot St. said they can house adult men, but only to a certain capacity.

“We get calls from the police and the hospitals asking if we have room for these men,” said Ineze Patterson with Fellowship Deliverance Ministries. “These men get three meals a day, share a room … these men work or regain skills they had and are assigned jobs around the shelter.”

She said while there is limited space now, the ministry plans to add 24 more units by March 1.

Muncy said a homeless coalition out of Atlanta will visit LaGrange on Friday to discuss new ways and ideas to tackle the problem within the community.

Demolition of Mansours in downtown LaGrange set for mid-March