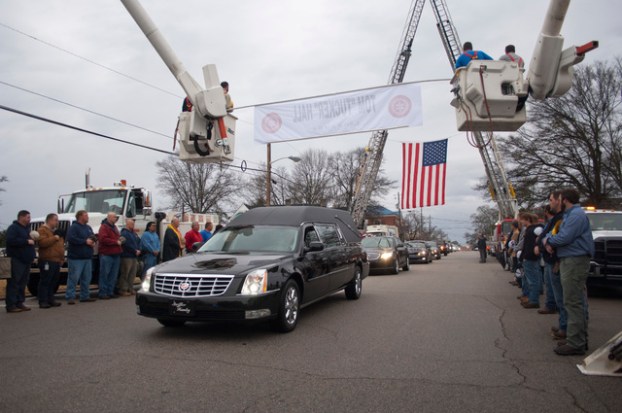 A funeral procession for the late Tom Hall, city manager from 1994 until his sudden death Feb. 16, passes by city employees Monday on Church Street.

LaGRANGE — In a ceremony steeped in tradition and symbolism, the life of late city manager Tom Hall was celebrated Monday at Saint Peter’s Catholic Church on Lafayette Parkway.

Leading to the funeral, a procession four blocks long traveled between two up-stretched fire engine ladders on Church Street where a sizable American flag waved between them in the foreground of cloudy gray skies.

City workers lined the street and stood silently as they held their ball caps and hardhats over their hearts. Police officers and firefighters saluted smartly in their dress uniforms as a black hearse carrying Hall’s casket passed by.

In the church’s crowded sanctuary, Hall was remembered for his duality. Many people — friends and family — knew Hall by his nickname, “Tucker.” Others whom Hall interacted with professionally knew him as Tom. He was both a visionary, tactical public servant and a steadfast father and husband who valued his privacy, mourners said.

“Like Saint Thomas the Apostle, who’s name means ‘twin,’ Tom or ‘Tucker,’ had two sides,” said the Rev. Patrick Scully, Hall’s pastor at Saint Peter’s who officiated the funeral Mass. “The reason LaGrange didn’t have to worry was that Tom did more than his own share of worrying for the city, something only his family and friends saw.”

Scully went on to say there was a “hole, a vacuum” left by Hall’s departure.

“Our competent city manager has left this city and gone to another place of peace, happiness and rest,” he said. “Some say in jest that city ‘Hall’ was named after him. Tom was constantly strategic and thrifty. … He had a sincere commitment to the common good.”

In a eulogy, Public Safety Chief Lou Dekmar, whom Hall recruited to LaGrange more than two decades ago, remembered Hall as an effective leader with a knack for cutting red tape.

“Tom was comfortable in his own skin,” Dekmar said. “He knew what he knew and he knew what he didn’t. … Tom achieved his goal: he made a difference.”

Dekmar told a personal story about a New York Times reporter visiting LaGrange years ago to research an article. As Dekmar told the story, the reporter, as he was leaving, said he was impressed with how adept and skilled Hall and other city department heads had been during interviews.

Perhaps annoyed that the reporter expected anything less, Dekmar said Hall turned to him after the reporter left “and looked at me with a deadpan stare and said, ‘Yeah, and we have toilets that flush, too.’”

Dekmar first met Hall when he was police chief of Morrow and Hall had come there as city manager. As a young police chief trying to do things by the book, Dekmar brought Hall a memo he wanted to distribute among his employees.

“But Tom was a resource guy, not a memo guy,” Dekmar said. “When I handed him my memo, he took it, folded it into a paper airplane, and tossed it back at me.”

Although many people knew Hall’s professional side, his son Dylan Hall, who also gave a eulogy, remembered his father as a motivating figure who challenged him and his younger sister, Cassidy.

“He showed me his love in so many ways,” Dylan Hall said. “In so many ways, he motivated and instilled in me a drive that I know will allow me to be successful.”

Dylan Hall said his father was equally as much “a problem solver at the city (as) he was at home.”

He shared a story of his adolescence when he was struggling with social issues at school and went to his father for guidance.

“And he went over the fridge and took out a bottle of Italian dressing,” Dylan Hall said. His father took the bottle, shook it up and explained that the problems in life are like the spices in the dressing bottle, and that “the oil is the good stuff. Eventually, the problems will settle to the bottom and the oil will rise to the top.”

In his closing remarks, Dylan Hall brought mourners to laughter when he channeled his father’s memory and said, “I think I would be remiss if I didn’t say, ‘It’s time to get back to work, guys.’”