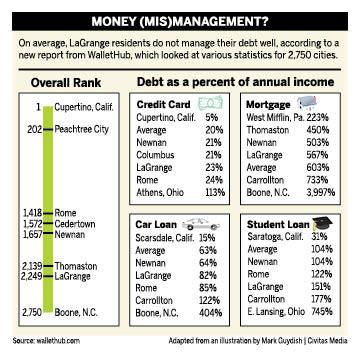 Give LaGrange residents some credit, please.

No, seriously. In a new ranking of how well residents manage money in 2,570 cities nationwide, “America’s Greatest Little City” ranked 2,249th, wedged between Savannah and Columbus at 66th place among 98 cities measured statewide.

Titled “2016’s Best & Worst Cities at Money Management,” the report was issued by WalletHub, which bills itself as the one-stop website for information “to make better financial decisions and save money.”

Some cities in West Georgia fared better on the list than LaGrange. Rome ranked 1,418th, and Newnan was 1,657th nationwide. Nearby Peachtree City ranked 202nd, the best in the state, and the dubious distinction of last place in Georgia went to Fairburn, which fell in the bottom 1 percent nationwide at 2,560th place.

WalletHub argued that the nation as a whole isn’t particularly budget savvy, noting the average credit rating — an overall score with a maximum of 850 calculated in this case by TransUnion — is 668, “considered fair by the most common scoring models.”

Nationally, the report added, “three-quarters of college students with credit cards admit to being unaware of late-payment fees.”

Out of seven west Georgia cities included in the study, LaGrange residents were the most likely to miss a payment.

The report suggested money smarts begin at home, with parents talking to their children about financial matters. One study by T. Rowe Price found 72 percent of parents are reluctant to hold that conversation.

But personal finance illiteracy extends to schools, the report says, with fewer than one in five teachers feeling competent to teach a course on it, and only 17 states requiring high school students to complete a course in it.

Why does it matter? In a nutshell, the report says, youngsters who learn about personal finances grow up to make better money decisions:

“The National Endowment for Financial Education found that students who were required to learn about money management at school became better adult consumers with higher credit scores, a greater tendency to save money and a lower likelihood of compulsive spending.”