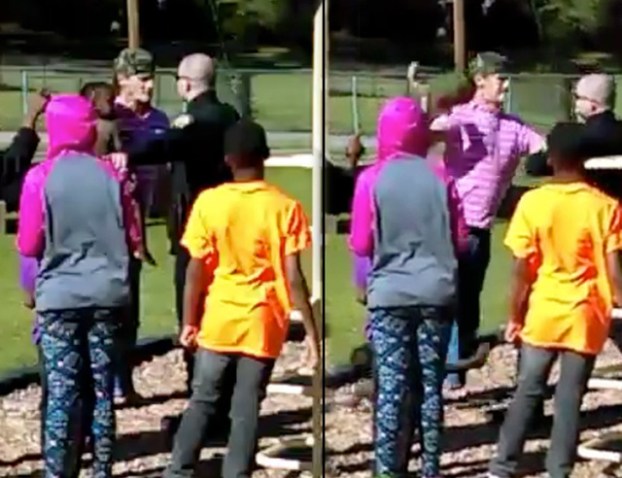 Still images captured from a video shows a man throwing a punch at LaGrange Police Officer Brady Pike on Saturday in the Lucy Morgan Homes housing authority property. Pike received a bloody nose and cuts in the incident, and the unidentified suspect was arrested.

http://lagrangenews.com/wp-content/uploads/sites/37/2016/04/web1_web0404OfficerFight-2.jpgStill images captured from a video shows a man throwing a punch at LaGrange Police Officer Brady Pike on Saturday in the Lucy Morgan Homes housing authority property. Pike received a bloody nose and cuts in the incident, and the unidentified suspect was arrested.

LaGRANGE — A LaGrange police officer is recovering Monday after he was punched in the face by a suspect while responding to call at the Lucy Morgan Homes on Borton Street.

Officer Brady Pike was called about a man creating a disturbance at the playground area about 3 p.m. Saturday, said LaGrange Public Safety Chief Lou Dekmar. The man had a child that belonged to another set of parents at the park, Dekmar said.

The ensuing fight between the two was captured by bystanders who recorded video of the scuffle with their cellphones.

In the first of two videos of the incident sent to the Daily News, the man continually swings at Pike, who takes the suspect to ground to try and subdue him. The video shows the man continue to resist Pike and hit him in the face again.

Dekmar said during the struggle, the officer’s body pack, including his camera and radio, fell off. But Pike was able to ask witnesses to call 911 and ask for help, which they did, stated Dekmar.

The second video, which picks up an unspecified amount of time later, shows a second LPD officer and a bystander helping Pike hold the man down and get him into handcuffs.

The suspect, whose identity has not been released as of press time, was arrested.

Dekmar said Pike was taken to the hospital to be checked out. Pike had a bloody nose and some cuts, but is expected to be OK, Dekmar stated.

“You go to a relatively routine call of a disturbance and then before you know it, you’re in the middle of fight,” Dekmar said via phone Sunday afternoon. “… I have had a preliminary discussion with the patrol supervisor. He feels the officer acted within the departmental standards and policies and within state law enforcement policies … The incident will be reviewed by the department commander, the office of professional standards and me. That is standard on all use-of-force cases.”

According to Dekmar, in any given year between 48,000 and 52,000 law enforcement officers across the country are physically assaulted while responding to 911 calls. Twenty-five percent of those end up going to the hospital.

‘Gangs are a form of domestic terrorism’