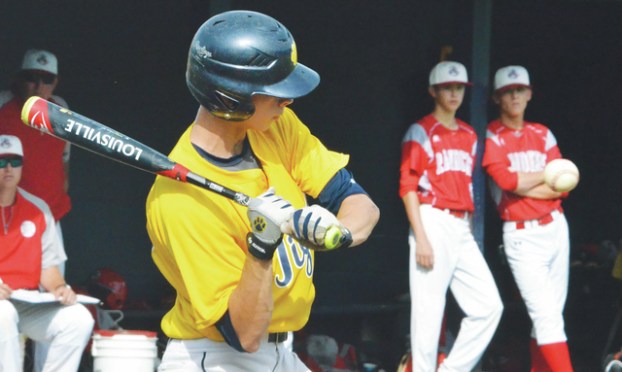 LAGRANGE – All he could say was thank you.

The Troup Tigers came into the playoffs with state-championship aspirations after putting together a sensational regular season that included a Region 5-AAAA championship, a nine-game winning streak to end the season, and a 21-5 record.

On Friday, the Tigers were hoping to take the first step toward a state title as they hosted the Madison County Red Raiders in the opening round of the Class AAAA state playoffs.

It wasn’t Troup’s day, though.

Madison County, the number four seed from Region 8-AAAA, came to Troup and swept a doubleheader, winning the first game 6-3 before finishing off the sweep with a 3-1 win in Game 2.

It was a heart-breaking conclusion to a special season for the Tigers.

When the second game ended, Troup head coach Craig Garner gathered his players together for one final post-game meeting and told them all how much he appreciated them, and how much he enjoyed being around them this season.

“This was a great group,” Garner said. “It was a great group of young men, a great senior class. Regardless of how far we went, it was probably the best group I’ve ever coached. They did a lot of great things. I was proud of them. Obviously we didn’t meet our goal (of winning a state title). But we’ve yet to meet our goal since I’ve been coaching.”

Down to their final two outs, the Tigers were threatening in the top of the seventh inning of Game 2.

With the tying runs on base and one out, senior Winston Turner was at the plate, and he ripped the ball to the left side of the infield.

Madison County’s outstanding senior shortstop, Wyatt Wood, made a sensational diving catch, and he flipped the ball to second base for the game-ending double play.

“It was a great feeling,” Wood said. “It’s huge for us being a four seed, to beat the number one seed like that. They’re third in the state. It was a big thing for us.”

While Madison County was only a four seed, it was ranked fifth in the state with a 20-6 record, so it came into the series with plenty of confidence.

“That’s what we came here to do was win those two games,” Wood said. “After that first one, we had a good feeling about the second one.”

In Game 1, Madison County took the lead with four runs in the top of the third inning, and it held on for the win.

Wood was on the mound for the first game, and while he gave up nine hits and walked four, he limited the damage.

Troup was hurt by seven walks and some defensive miscues that led to Madison County runs.

Offensively, it was all about missed opportunities for the Tigers, who had their chances to break through for a big inning but were unable to make it happen.

“I think we had seven walks, an error. Those things will bite you,” Garner said. “And we had a couple of situations at the plate where we should have been a little more patient. We hit into some double plays.”

Troup jumped on top with a run in the bottom of the second inning.

Miles Cameron singled, moved to second on a bunt by Colby Williams and scored on a double by Brandon Gay.

Madison County responded with four runs in the top of the third to take a lead it wouldn’t relinquish.

Golston Gillespie had an RBI single in the inning, and Madison County scored its other runs on an error and a wild pitch.

Troup threatened in the bottom of the third.

With two outs, Bo Halcomb and Turner reached on back-to-back singles and Cameron walked to load the bases, but Wood got out of the jam with no runs scoring.

Troup did put two runs on the board in the bottom of the fourth inning to get within one.

Colby Bridwell singled, and he came around to score on a two-out double by Ken Truitt, and Madison County’s lead was down to two.

Ryan Bliss kept it going with an RBI single to make it a 4-3 game, but once again Wood worked out of trouble, getting a groundout with men on second and third to avoid further trouble.

Madison County capped the scoring with two runs in the top of the fifth.

Noah Rogers walked with the bases loaded to drive in one run, and Wood had an RBI single to bring in another run.

The Tigers had men on in each of the final three innings, but they were unable to score.

Wood was helped tremendously by double plays in the fifth and sixth innings.

Turner, Bridwell and Truitt each had two hits for Troup, and Gillespie had a hit and two RBIs for Madison County.

Turner was Troup’s starting pitcher, and he threw the first four innings.

Williams did a terrific job in relief, pitching three scoreless innings, allowing one hit while striking out four, and he didn’t walk anyone.

In the second game, left-hander Dylan Gentry was on the mound for Madison County, and he delivered a stellar outing.

Gentry allowed two hits and five walks, and he struck out six on the way to the the complete-game win.

Madison County got all the offense it needed in the bottom of the third inning, and it scored all three runs on one swing of the bat.

Gillespie got a pitch to his liking, and he drove the ball over the left-field fence for a three-run home run, giving Madison County a 3-1 lead.

Troup had taken the lead with a run in the top of the third.

Bliss singled and stole second, and he scored on a Turner base hit, and Troup led 1-0 before Madison County rallied in the bottom of the inning.

Troup had base runners on in every inning the rest of the game, but it couldn’t break through.

In the top of the seventh, Truitt and Bliss walked, putting the tying runs on base with one out.

Turner, who has had a phenomenal senior season, mashed the ball, but it just happened to find Wood’s glove, setting off the series-clinching celebration.

Payton Upchurch started for Troup, and he pitched the first three innings.

Halcomb entered the game in relief in the fourth inning, and he was dominant, allowing just one hit while striking out three.

OF NOTE: For more photos from Friday’s games, check out facebook.com/LDNsports

LaGrange on road for first round By Kevin Eckleberry keckleberry@civitasmedia.com The LaGrange Grangers celebrate a big win over Hardaway earlier... read more