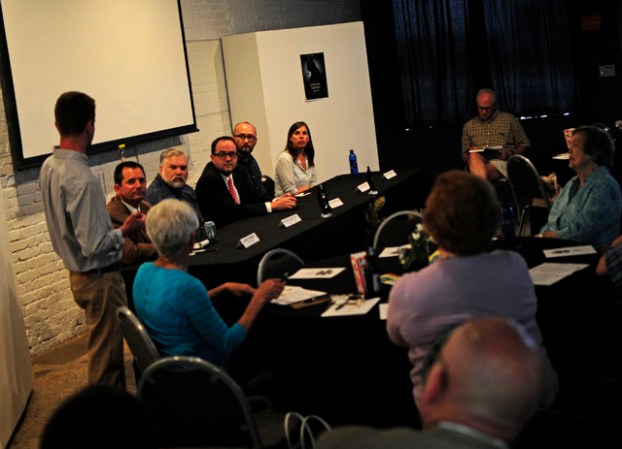 LaGRANGE — “And we don’t want to live in these places. Let us have our own place. A simple place in the light of day. An ordinary place untouched.”

The ominous words — part of the narration to “General Orders No. 9,” which screened at the LaGrange Art Museum’s Center for Creative Learning to a packed room Thursday — became a brief focal point during the after-movie forum. Troup County Engineer James Emery referred to the line — diverting from discussion about routing traffic from downtown and the controversial Northwest Connector — as he addressed urban sprawl and whether people should stay concentrated around infrastructure.

“The subtitle (of the movie), ‘What should the new map look like?’, there was something about that question,” Emery said. “And this movie left me with so many more questions than it did answers, and it’s caused me to contemplate endlessly.”

The movie examines the cost of urban development to nature and history, contrasting big cities and rural areas in scenes devoid of people and a stream-of-consciousness-like narration. It was, panelists felt, an apt comparison to the choices facing LaGrange and Troup County as more potential developments and changes arise.

Emery felt anyone who had a role in shaping “the new map” should take ownership of it, and leadership needs to take up ideas on how to shape growth and strike a balance between sprawl and conservation. He noted how some cities like Los Angeles and Portland have strict boundaries past which no development is allowed.

LaGrange Mayor Jim Thornton chimed in, and said that during a visit to the U.K., where his in-laws hail from, the family had to jump through hoops and get approval to build on land they owned.

“They couldn’t go on their own land, their own 20 acres, and build a house,” he said. “Can you imagine if I proposed that as mayor of LaGrange — the reaction I would get? We can’t imagine that level of control and minutia and planning, but if you don’t have that, if you don’t have somewhat a level of planning, then you have sprawl. So the challenge that … county commissioners and city council members have is to figure out where that balance is, the balance between being too restrictive and too permissive.”

Thornton said elected officials need the input from the public to try and find the balance. He touched on the question of handling traffic on Vernon Street and whether rerouting the road is the best solution. Referring to the option of expanding the road, he said that would mean losing historic homes along about a mile of the road in order to get traffic through the city faster.

LaGrange City Planner Leigh Threadgill earlier in the forum noted balancing development and sprawl is what her position considers. She also said “context matters.” Having worked in Peachtree City and Atlanta prior to coming to LaGrange, she noted people have different expectations in different areas.

Addressing a question about Lafayette Parkway, Threadgill again noted balance as the city considers whether the zoning there is too permissive, allowing it to become crowded with development, or clamp down and potentially restrict businesses and landowners to how they can develop the land.

“We, as a community, need to decide where we draw that line,” she said.

One resident said stories are the most important thing for people to preserve, refer to and learn from. Panelist Ben Wheeler, DASH for LaGrange director of community building and organizing, said a group of Hillside residents are planning a project where they will go talk to people in the community and gather their stories to preserve.

“We talk about building capital, but I think human capital is also really important,” Wheeler said.