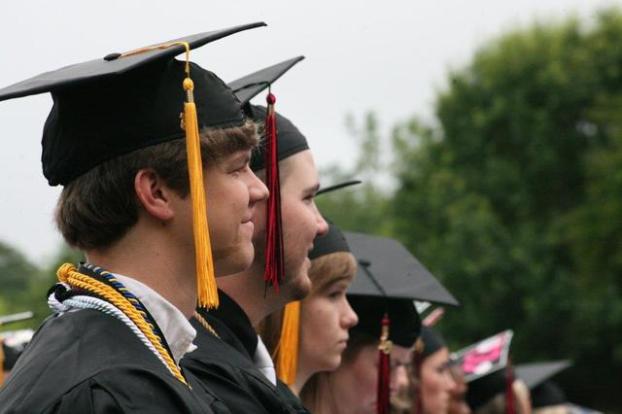 Nursing graduate Pauletta Whittingdon pauses for a post-ceremony photo with her husband. Whittingdon received the Louise R. Gallant Award at the Nursing Pinning Ceremony on Thursday evening. The honor is given by Wellstar West Georgia Health to the year’s outstanding Sims Scholarship recipient.

http://lagrangenews.com/wp-content/uploads/sites/37/2016/05/web1_web0523LCcommencement07-1.jpgNursing graduate Pauletta Whittingdon pauses for a post-ceremony photo with her husband. Whittingdon received the Louise R. Gallant Award at the Nursing Pinning Ceremony on Thursday evening. The honor is given by Wellstar West Georgia Health to the year’s outstanding Sims Scholarship recipient.

LaGrange College student Justin Slay, far left, awaits his turn with other seniors to cross the platform during Saturday morning’s commencement ceremony. About 230 students received their diplomas during the ceremony, which is the college’s 185th.

http://lagrangenews.com/wp-content/uploads/sites/37/2016/05/web1_web0523LCcommencement01-1.jpgLaGrange College student Justin Slay, far left, awaits his turn with other seniors to cross the platform during Saturday morning’s commencement ceremony. About 230 students received their diplomas during the ceremony, which is the college’s 185th.

“It’s a moral imperative to leave the world a better place for tomorrow’s child,” she said.

Seydel was the commencement speaker at the college’s 185th graduation ceremonies, where about 230 students received their diplomas under a gray sky and amid light sprinkles of rain.

President Dan McAlexander welcomed the crowd to “this grand historic tradition.” Addressing the graduates, he said, “I’m confident you will be successful and responsible citizens who will lead lives of integrity and moral courage.”

On behalf of the senior class, Lindsay Munson presented McAlexander a check for $1,115.16, the result of the annual Senior Giveback Challenge.

Carmen Findley, this year’s winner of the Waights G. Henry Jr. Leadership Award, said her time at the college has changed her life.

“I’ve learned confidence and leadership skills,” she said. “In working with Circles of Troup, I saw the struggles of others, and that has made me less self-centered and more determined to do something with my life.”

She urged her classmates to always remember the words of John Wesley.

The Distinguished Service Alumni Award was presented to Stan Moor — class of 1972. He described the love affair he’s had with the college for almost 50 years.

“I fell in love the first minute I stepped onto this campus,” he said. “Choosing this college was the best decision I ever made.”

Moor said he has always appreciated LaGrange’s motto – to challenge the mind and inspire the soul – but is particularly fond of a phrase that has been recently added.

“Learn. Lead. Transform,” he said. “This institution certainly did that with me. It took this shy and nerdy kid and gave me opportunities to learn and to lead.”

He advised the students to do something every time they take a selfie photograph.

“Imagine a composite of your family, friends, mentors and coaches standing there behind you,” he said. “Always remember those who have stood behind you.”

Seydel took the opportunity to talk about three people she called key influences for her and this generation.

“My father shared his conservation ethics with his children,” she said. “We were constantly reminded to be responsible citizens. I know this man as Captain Planet. You know him as Ted Turner.”

Seydel listed a few of her father’s accomplishments, including the launch of CNN, the first 24-hour news channel; the creation of the Goodwill Games that brought Russia and the U.S. together by using sports as a diplomatic tool at the height of the Cold War; and the establishment of the United Nations Foundation.

But there was one idea that was special, she said.

“The Cartoon Network was an amazing vehicle to reach millions of young people,” she said. “My father thought it was important for youth to be entertained and to be engaged with issues that affect the world. He did that through ‘Captain Planet and the Planeteers.’”

But even growing up with a real-life Captain Planet didn’t help Seydel realize her life’s passion. Her “aha moment” came when she started volunteering with the Georgia Conservancy.

“That’s when it all clicked and the lessons of Captain Planet came full circle,” she said. “I realized that water pollution on the Chattahoochee River was something we needed to fight.”

It was through the Conservancy that she met her second legend.

“Sally Bethea is a real-life superhero who has worked to restore our precious Chattahoochee. She honed her skills and became an expert on water issues. We banded together to form Chattahoochee Riverkeeper.”

To achieve the mission of protecting and restoring the Chattahoochee River, the group had to take the City of Atlanta to court over its refusal to address the pollution of the river.

“Winning that lawsuit resulted in a $4 billion investment in upgrading Atlanta’s sewer infrastructure,” she said. “Now, the river’s pollution has dropped by 90 percent.”

“He knew how important clean water was,” she said. “Interface became one of the most sustainable carpet manufacturing companies in the world. He turned the carpet industry upside down.”

Anderson had a goal for Interface called Mission Zero.

“He wanted to eliminate any negative impacts on the environment by 2020,” she said. “He spent the rest of his life inspiring others to do the same.”

Anderson also cared a lot about LaGrange College, she said.

“He gave of his time, talent and treasures to help make this one of the leading institutions of sustainability in the country.”

Seydel advised the graduates to remember Turner, Bethea and Anderson as they pursue their dreams.

“You can be a leader in your own sphere of influence,” she said. “Our hopes now rest on you. You have at your fingertips the technology, innovation and resources to make an impact and to make a difference. As Captain Planet says, “The power is yours.’”

Shelter soon to be homeless again

Organizers seek new place for homeless at night By Melanie Ruberti mruberti@civitasmedia.com A temporary warming center is set up at... read more