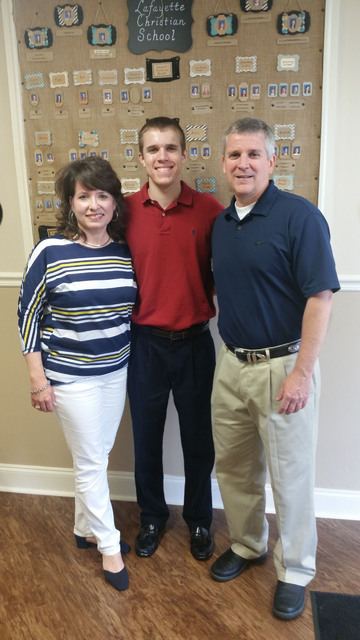 ‘I really want to serve my country’

Lafayette Christian School student Caleb Corban, 19, stands with teacher Glenn Quiggle, a retired Navy Commander who was in the service for 30 years. Quiggle was Corban’s teacher, football coach and helped him through the process of applying to the Naval Academy in Annapolis, Md.

http://lagrangenews.com/wp-content/uploads/sites/37/2016/05/web1_Caleb2-1.jpgLafayette Christian School student Caleb Corban, 19, stands with teacher Glenn Quiggle, a retired Navy Commander who was in the service for 30 years. Quiggle was Corban’s teacher, football coach and helped him through the process of applying to the Naval Academy in Annapolis, Md.

Caleb Corban’s appointment to the United States Naval Academy for 2016.

http://lagrangenews.com/wp-content/uploads/sites/37/2016/05/web1_Caleb3-1.jpgCaleb Corban’s appointment to the United States Naval Academy for 2016.

LaGRANGE — This Memorial Day took on a whole new meaning for Caleb Corban, 19, and his family.

In one month, Corban will officially be inducted into the Naval Academy in Annapolis, Maryland, and take an oath, pledging his loyalty and commitment to protect the United States of America.

“I’m excited to be with a lot individuals wanting to serve their country,” Corban said. “They’re willing to sacrifice their lives for their country. That’s what we’ve signed on to do.”

It has been a long, arduous, emotional journey for the teen and his family.

Once Corban had his heart set on going to the Naval Academy, so began the diligent task of helping him achieve his goal.

During his junior year at Lafayette Christian School, with the help of his teacher and mentor, coach Glenn Quiggle, a retired commander who spent 30 years in the U.S. Navy, Corban and his parents filled out mountains of paperwork. Throughout his senior year, they asked for several recommendation letters, and he competed for scholarships and — maybe most importantly — landed interviews with state senators and congressmen who would hopefully give the teen a nomination to the prestigious school.

The Daily News spoke to Corban and Quiggle in November 2014 while they were still in the application process.

“I know he can do it. He has the extreme determination and motivation to do it,” Quiggle said at the time. “He plans ahead, he’s got that mental toughness …”

According to the Naval Academy website, more than 17,000 students apply each year, however just under 1,400 will be admitted their freshman year — an average of 7.9 percent.

Corban received an appointment, but was put on a waiting list. Though very close to being one of the first ones called to attend the school, ultimately, the teen did not get to go, said his dad, Craig Corban.

But the disappointing news just made the younger Corban more determined than ever. The teen enrolled in North Georgia College for one year and diligently started the application process into the Naval Academy all over again. This time, he cast his net wider and applied to the United States Military Academy in West Point, New York, and other universities too.

“I said, ‘Go get them,’” Quiggle said. “I knew the military schools would look on that favorably. … There would be the track record there. I hoped he would be goal directed. We rewrote a lot of recommendation letters,” he laughed.

The group’s hard work paid off once again. He received nominations to both military academies from Congressman Lynn Westmoreland, Sen. Johnny Isaakson and Sen. David Perdue.

Still, Corban was surprised when his phone rang in early February.

“I still have the voice mail … it was Feb. 11,” he said. “It was 7:30 at night and I was at bible study. I listened to the message later. It was from Congressman Westmoreland. He said, ‘I just wanted to tell you congratulations on your appointment to West Point.’”

The teen immediately called his parents.

“It was a shocker because we thought, ‘Naval Academy all the way,’” said Craig.

The family was not disappointed. A few weeks later, Corban received a letter in the mail stating he had indeed also been appointed to the Naval Academy.

Corban once again called his family, who immediately called Quiggle.

“I did a ‘war whoop.’ I was jumping up and down. I was really proud,” said Quiggle. “I started calling him ‘Ship Mate.’ That’s his new name.”

“Coach Quiggle was the first one we wanted to tell. He was a great influence on him,” stated Craig Corban. “I was just so proud because I don’t think a lot of people believe you can go to a small school like LCS and have an opportunity like this to go to the Naval Academy.“

Corban is the first student in Lafayette Christian School history to ever receive an appointment to the Naval Academy.

The Corbans traveled to both the West Point Military Academy and the Naval Academy at the end of March to see what both schools had to offer. They said they were impressed with both campuses, but ultimately the choice was up to Corban.

For Corban, the decision was clear.

A role he has prepared for almost all his life — that his parents are now getting used to as they prepare to say goodbye to their son. Corban will leave for “plebe summer,” which is essentially boot camp for incoming freshmen at the Naval Academy, on June 28.

“I’m glad he’s able to pursue … and have the opportunity to go after his passion,” stated Judy Corban, Caleb’s mom. “All we’ve heard for four years is, ‘I want to be a Navy SEAL.’ My head is so excited, but my heart is so nervous. But God has given me peace.”

Corban will attend the Naval Academy for four years, during which he also hopes to become an officer, in addition to qualifying for SEAL training. After graduation, he has committed to serving the U.S., defending the country and protecting freedoms for five years, if not longer.

“I’ve always wanted to do combat too. So if I can’t do SEALs, then I can transfer into the Marines and do combat … but I really want to serve my country. I want to go to officer school, become an officer and I want to be the best one I can be,” Corban said.

The Corbans also learned he was accepted into Georgia Tech as well.

‘I knew it was going to be bad’

58 animals found in home, 50 euthanized By Melanie Ruberti mruberti@civitasmedia.com This is one of 11 dogs found inside a... read more