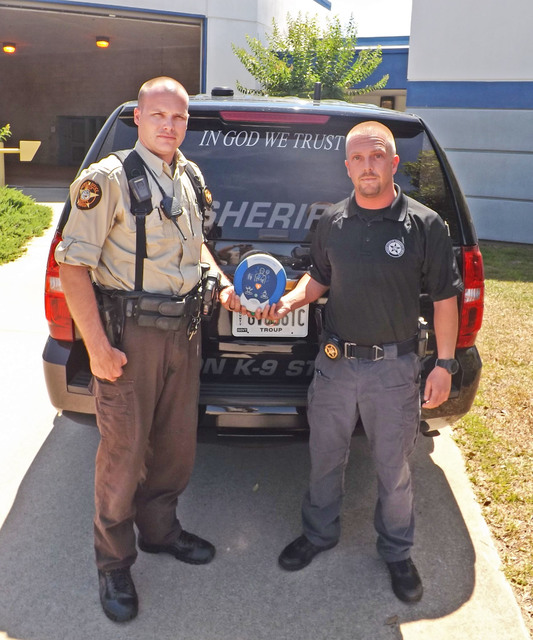 LaGRANGE — Troup County Sheriff’s Office Investigator Eric Massengill was on call June 4, a Saturday, and on the way to a call when he heard an urgent dispatch from 911 over his radio.

A car was traveling in the wrong direction on Interstate 85.

“She said the car was traveling northbound in southbound lanes. I looked up and saw it,” Massengill said. “I said, ‘911, I’ve got eyes on the scene.’ Then it just happened — one thing after the other.”

The car came to a rest on the bridge in the right hand lane facing the wrong direction at mile marker 10 near West Point, stated Massengill. It appeared the car crossed median, but did not strike any other vehicles.

“I pulled up, and I could immediately tell something was wrong … (the driver) was slumped over the steering wheel,” the investigator said. “It appeared he was still breathing and his foot was on the brake, but his car was still in drive and the doors were locked.”

Massengill jumped back in his patrol vehicle and pulled it in front of the man’s car so it would not roll back into traffic.

About the same time, Deputy Matt Mayfield arrived on scene. He also placed his patrol car in front of the vehicle.

“At that moment, all traffic flow was stopped in the southbound direction,” Mayfield said. “As I exited my vehicle, I could see the driver slumped over in the driver’s seat …Investigator Massengill advised me he did not think the driver was breathing.”

Mayfield pulled out his baton and shattered the back passenger window on the car, he said.

“I was able to crawl into the back seat, unlock the driver’s door and place the vehicle into park,” Mayfield remembered. “I went around to the driver’s door, opened it and checked for a pulse or any signs of breathing.”

Mayfield and Massengill quickly extracated the man from his vehicle.

“When we initially pulled him out … he wasn’t breathing and had no pulse,” Massengill said.

The investigator started chest compressions on the man while Mayfield grabbed the automated external defibrillator, or AED, from his patrol car, stated Massengill.

“During the end of us doing CPR, he started to regain a pulse,” Massengill remembered.

Once the victim was loaded into the ambulance, Massengill headed to his original call — not knowing the man’s name or if he lived.

Both men were happy to learn the driver survived his medical emergency, and would like to meet him, but neither considers themselves a hero.

“I would like to meet him,” said Massengill. “I don’t credit myself or Mayfield for saving his life. We were just doing what we were trained to do. … We are both just happy that he made it. Typically it doesn’t work out that way.

“I was just at the right place at the right time,” he continued. “There’s really no other explanation for it.”

“It’s my job. I believe in what law enforcement and public safety stands for and I will always put the needs of citizens in Troup County, or people traveling through, ahead of mine. I will do it for anyone,” said Mayfield. “It is an honor and privilege to serve people; just as it was an honor and a privilege to have contributed to saving that person’s life …”

The driver’s identification and condition has not been released due to HIPAA laws.

“We’re so proud of our officers’ quick thinking and actions in using the AED in saving the man’s life,” said Troup County Sheriff James Woodruff. “We’re also so appreciative of the Heart of West Georgia for donating the four AEDs so our deputy had one in the patrol car.”

The Heart of West Georgia donated the life-saving devices to the sheriff’s office in January. Each deputy on patrol has an AED in their car per shift, said Woodruff.

Troup County Sheriff Deputy Matt Mayfield, left, and Investigator Eric Massengill, right, hold an AED device, which is placed in every TCSO patrol car each shift. The two men used the life saving equipment on a driver who passed out behind the wheel on Interstate 85 on June 4. The man survived the medical emergency.

http://lagrangenews.com/wp-content/uploads/sites/37/2016/06/web1_web0612Deputies.jpgTroup County Sheriff Deputy Matt Mayfield, left, and Investigator Eric Massengill, right, hold an AED device, which is placed in every TCSO patrol car each shift. The two men used the life saving equipment on a driver who passed out behind the wheel on Interstate 85 on June 4. The man survived the medical emergency.

LaGRANGE — A man accused of robbing three people at gunpoint by tricking them into meeting him to buy cellphones... read more