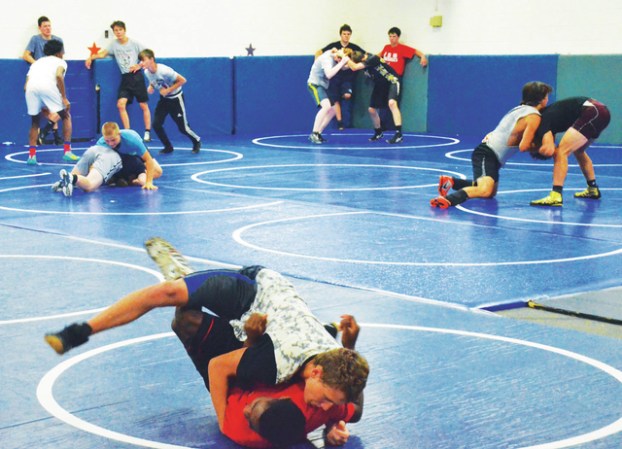 Wrestlers getting plenty of mat time

LAGRANGE – There’s nothing easy about wrestling.

It’s a sport that asks a great deal from its participants, and the training regimen can be a grueling and exhausting one.

This week, wrestlers from a handful of different schools are participating in a four-day camp hosted by LaGrange High at Unity Elementary School.

The wrestlers will be on the mat for six hours of instruction time each day, and they’ll be pushed by the coaches.

Knowing how hard the wrestlers work, and how difficult those six hours can be, Monday’s lead instructor wanted to make sure they had some fun.

Callaway head coach Josh Ghobadpoor, one of three men who’ll serve as lead instructor this week, mixed things up on Monday afternoon, giving the wrestlers an opportunity to play a few games.

The camp will continue through Thursday, and while Ghobadpoor will be there the rest of the week, two other men will take turns as lead instructors.

Isaac Figueroa will lead today’s session, and he’ll be combining lessons he learned as a wrestler at LaGrange High, and as a mixed martial arts fighter.

During the final two days of the camp on Wednesday and Thursday, Haralson County head coach Nick White will take over as the primary instructor.

On Monday, it was Ghobadpoor leading the wrestlers through the six hours of instruction time.

Ghobadpoor, who was an assistant at LaGrange High before taking over the Callaway program last season, said he enjoyed the opportunity to get to know the wrestlers from other teams.

“It’s always nice to see another group of guys, kind of reach out,” Ghobadpoor said. “We’ve got a lot of different teams here. You just try to bring a little bit of what you love about wrestling. I got to talk to them about a little of this, a little of that. I don’t want to get on my soap box with them too much. They’re not my kids. But I just tell them, this is the way it is.”

LaGrange head coach Scooter Weathers, who has been hosting the camp for about 10 years, said the wrestlers benefit from learning from coaches other than their own, although he stressed that it’s up to each wrestler to figure out what works best for them.

“If there’s stuff they can learn from another coach, that’s great,” Weathers said. “But Josh made a great point today. Don’t go tell your coach that this guy said I’ve got to do it this way. You can do a move five different ways. It’s whatever benefits you, whatever works for you. Everybody’s different. It’s what you’re comfortable doing.”

Ghobadpoor said he always enjoys being around other wrestlers and coaches.

It’s a competitive, hard-fought sport, but Ghobadpoor said the wrestling community is a close one.

Ghobadpoor said it was a nice mix of wrestlers at Monday’s camp session.

“We’ve got seniors. We’ve got middle-school kids out here,” he said. “It’s nice to see them having a little bit of fun together in a sport that’s so tough.”

As for today’s session, Weathers said Figueroa will be bringing a lot of what he has learned as a professional MMA fighter into the room.

“He’ll do a lot of on the mat, grappling, and MMA stuff,” Weathers said. “He’ll show them stuff that’s legal wrestling wise. The guys will be oohing and aahing awing because he’s an MMA fighter.”

LAGRANGE – He’s ready to get back to doing what he loves. The last time Luke Elder was on a... read more