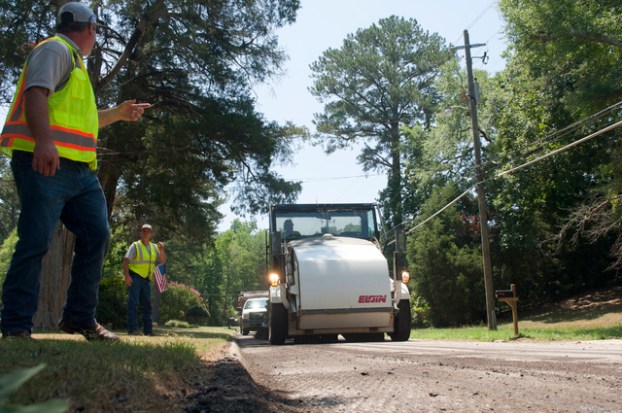 LaGRANGE — When it rains, it pours — and all that stormwater has to go somewhere.

That’s why on Monday, the city’s public works department set about removing about 4 inches of asphalt along Piney Woods and Lakewood drives.

The goal, according to city roads superintendent Chris Prather, is to create more curb height to keep stormwater on city streets and flowing into drains, rather than cresting onto residents’ properties.

“After so many years of asphalt, the water runs up over the curb,” he said as a nearby machine worked its way down Piney Woods Drive tearing up asphalt. “Now, we’ll have about 6 inches of curb to keep the water from jumping.”

The process is called edge milling, and it works by removing about 4 inches from the edge of the street, Prather said.

“The only other solution is to build up the curb,” said Prather. “But this is much less expensive.”

Crews removed asphalt from about 2,000 feet of Lakewood Drive and another 1,000 feet or so from Piney Woods.

David Brown, the city’s public works director, said the milling won’t solve all the problems, but it’s a quick fix that should help alleviate some of the stormwater runoff.

“When we have torrential rainfalls, if you’ve got a property that’s below street level, you have to have enough curb height to get the water in the street where it’s supposed to be discharging,” Brown said.

He added that sometimes, driveways have not been property constructed and allow stormwater to flow down into residents’ driveways, creating additional problems.

Over the past few years, the city has used special-purpose, local-option sales taxes to repave about 100 miles of city streets, Brown said. Those streets were not milled before repaving, which caused the curb height be reduced. The trade off, Brown explained, was the city could repave more streets.

“If we’d milled them all, we’d probably have done about 25 miles of streets by now,” Brown said.

Still, there’s bigger problems down the road for LaGrange than just some stormwater jumping the curb. Since the 1972 passage of the Clean Water Act, state and federal regulators have been pushing communities to manage and clean up their stormwater.

In Georgia, that effort is defined by the Municipal Separate Storm Sewer System permit program, or MS4 for short. Not every community has to have an MS4 plan, because the requirement is based on population numbers and density. Soon, though, Brown expects LaGrange to be required to craft an MS4 plan.

“I’d expect to see that coming sometime after the 2020 census,” he said.

Essentially, LaGrange would be required to develop a plan that protects stormwater quality and control, which Brown said could be a major headache.

That public stewardship of private land is what Brown called one of the most challenging questions of his more than 25 year career with the city.

Brown used a hypothetical — albeit likely — scenario to explain.

If a private business has a parking lot that becomes covered in motor oil dripping from cars, then it’s not the city’s responsibility to clean that motor oil up, he said. But, when rain falls and washes that motor oil into city storm drains, then the pollution does become the city’s problem.

“I’ve heard of the EPA (Environmental Protection Agency) taking legal action against jurisdictions that fail to act to clean up their water,” Brown said.

The same sort of problem can happen with pesticides from residential lawns, or sediments in creeks that flow through private land.

“Trying to get people to understand stormwater, its impact, who owns it and the homeowner’s responsibility has been the hardest task of my whole career,” he said.

For now, Brown has to wait on direction from the city’s elected officials. Earlier this month, he made a presentation to the mayor and City Council asking them for guidance. Until they respond, he’ll have to continue addressing “hot spots,” as he called them, and seeking to mitigate the problem as simply and cost efficiently as possible.

“First we have to decide who has responsibility for this, and how that’s going to be enforced,” he said. “Because soon, we’re going to have to maintain the (stormwater) quality.”

City worker Houston Austin uses a milling machine to tear up asphalt and create a curb on Piney Woods Drive on Monday. The new curb is aimed at preventing stormwater from overflowing into lawns.

http://lagrangenews.com/wp-content/uploads/sites/37/2016/06/web1_Milling02-1.jpgCity worker Houston Austin uses a milling machine to tear up asphalt and create a curb on Piney Woods Drive on Monday. The new curb is aimed at preventing stormwater from overflowing into lawns.

City streets superindendent Chris Prather, left, speaks with public works employee Will Binion as crews mill a section of Piney Woods Drive on Monday. The milling is aimed at creating a higher curb to prevent stormwater from overflowing.

http://lagrangenews.com/wp-content/uploads/sites/37/2016/06/web1_Milling01-1.jpgCity streets superindendent Chris Prather, left, speaks with public works employee Will Binion as crews mill a section of Piney Woods Drive on Monday. The milling is aimed at creating a higher curb to prevent stormwater from overflowing.

LaGRANGE — Twin Cedars Youth and Family Services is raising the bar when it comes to recognizing the signs of... read more