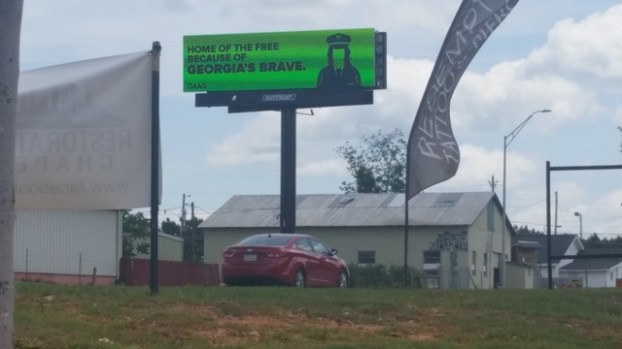 ‘Home of the brave’

LaGRANGE — Law enforcement officers are receiving some positive face time on billboards around the state of Georgia — including one off Lafayette Parkway near Greenville Street.

The Outdoor Advertising Association of Georgia, or O.A.A.G, is using available space and lighting up digital billboards with “thank you” messages for police officers, sheriff’s deputies and emergency first responders.

“We wanted to direct this message towards anyone that wears a badge: firefighters, emergency responders, folks with the Department of Natural Resources, search and rescue, Georgia Bureau of Investigation, Federal Bureau of Investigation and of course, local law enforcement officers,” said Connor Poe, president/CEO of the Outdoor Advertising Association of Georgia.

The message reads, “Home of the free because of Georgia’s brave” and is featured several times with a variety of colors and silhouettes of first responders. The bulletin runs between advertisements for local businesses.

The “thank you” note is currently running on 125 digital billboards around Georgia, said Poe. The O.A.A.G. wanted to encourage and show their support for folks who put themselves in harm’s way every day to protect their communities.

Poe added the O.A.A.G. partners with law enforcement agencies such as the GBI and the FBI on a regular basis.

“Usually for the GBI or FBI, if there is a dangerous fugitive on the loose, we’ll post rewards with pictures on our digital billboards. … We also do a lot of missing persons reports too when there are Amber Alerts issued around the state,” he explained.

The signs started running on Wednesday. Poe said they will run indefinitely as long as there is space available.

“This is probably something we’ll do more often,” he stated. “We’ll probably start partnering with local law enforcement more. … If they ever need to utilize the digital billboard for an event, missing person or a dangerous fugitive on the loose they can call us. We’ll get a public service announcement up there for them as quickly as we can.”

O.A.A.G.’s local billboard is in the 1300 block of Lafayette Parkway across from the Lafayette Centre shopping area that once housed the Hog Heaven restaurant.

A new, bright message is displayed across a digital billboard owned by the Outdoor Advertising Association of Georgia. The billboard, on Lafayette Parkway near Greenville Street, thanks area law enforcement officers and first responders.

http://lagrangenews.com/wp-content/uploads/sites/37/2016/07/web1_Billboard1-1.jpgA new, bright message is displayed across a digital billboard owned by the Outdoor Advertising Association of Georgia. The billboard, on Lafayette Parkway near Greenville Street, thanks area law enforcement officers and first responders.

http://lagrangenews.com/wp-content/uploads/sites/37/2016/07/web1_Billboard2-1.jpgA car drives by a digital billboard on Lafayette Parkway displaying a message to first responders. The digital billboard is one of 125 across Georgia to display the message of encouragement and support.