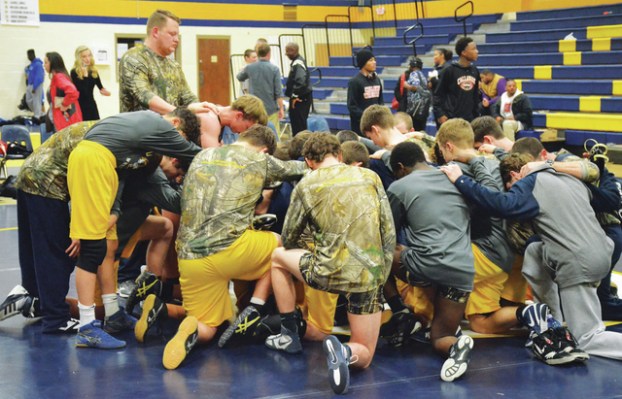 Everything’s right on track for Tigers

LAGRANGE – They’re ahead of schedule, and for Troup head football coach Tanner Glisson, that’s a nice change of pace from a year ago.

Last July as the team kicked off preseason practice, Glisson was still in the early stages of his tenure as the Tigers’ head coach, and he was trying to play catch-up.

That’s not the case this year.

Glisson has been with the players for more than a year now, and when they made their way onto the field on Monday morning for the first preseason practice, they were ready to go.

Friday marked the conclusion of the first full week of practice for the Tigers.

The players will get together again on Sunday evening for what Glisson is calling a “lift-a-thon,” and that will be the start of camp.

On Monday, Troup will hold its first full-contact practice as the preparation rolls on for the regular-season opener on Aug. 19 at Hardaway.

“It’ll be the first time we put the pads on,” Glisson said. “And we’re to the point now where we can start putting in some game plans. We don’t have to wait like we did last year.”

While official preseason practice didn’t begin until last week, the Tigers have been hard at work a lot longer than that.

Not long after the 2015 season ended in November, the preparation for a new season in earnest.

“Most people will not understand how much work we put in from January to now,” Glisson said. “It’s been non-stop. We’ve never slowed down. You like to say you’ve got different seasons. You’ve got install, which starts in January. Then you’ve got your mat drills, where you try to get tough. Then you have spring practice, and then you have summer weights and conditioning and stuff, and then you lead right into this.”

Troup will play a preseason game at Harris County on Aug. 12, and a week later it will begin its second season under Glisson.

The Tigers will be looking to bounce back from a difficult 2015 season where they went 1-9 and didn’t win a game until the regular-season finale.

Glisson knew it was going to be an uphill challenge when he arrived on the scene a year ago.

It was a program dealing with the latest in a long line of coaching changes, and Glisson was trying to earn the trust of the players.

“Last year, we had to come in and coach them on how to work hard, and building relationships, so we could coach them,” Glisson said. “Xs and Os, it was just a moot point once we got here last year because we were so far behind. Now, it’s all kind of gelling together. The key now is we have to stay healthy, we need some younger guys and some leaders to come forward. All in all, it looks pretty promising.”

While the varsity players practiced in the morning last week, the junior-varsity and freshman players had their own practices in the evening.

Glisson felt it was important to allow the least experienced players a chance to practice without the worry of getting lost amidst the veterans.

“We call that orientation,” Glisson said. “That’s basically what it is. We’re not working them as hard. They get oriented to what’s going on, to the new surroundings. And that doesn’t take away from these (varsity) guys being able to work. We don’t have to slow down. We can keep moving.”

The Troup Tigers enjoy themselves toward the end of Friday’s practice session. The Tigers have completed the first week of preseason practice. Kevin Eckleberry | Daily News

http://lagrangenews.com/wp-content/uploads/sites/37/2016/07/web1_troup3-1.jpgThe Troup Tigers enjoy themselves toward the end of Friday’s practice session. The Tigers have completed the first week of preseason practice. Kevin Eckleberry | Daily News

HOGANSVILLE – As the Callaway Cavaliers hit the field on a sweltering Monday afternoon, it marked the opening day of... read more