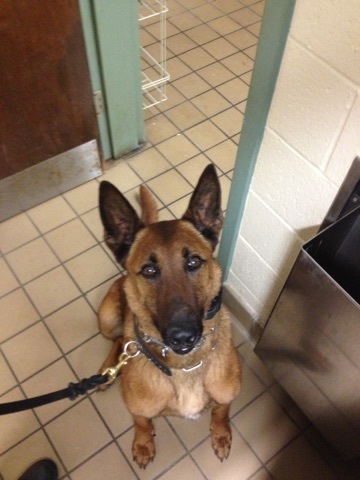 ‘He was my best friend’

LaGRANGE — There were no secrets between LaGrange Police Officer Joshua Clower and his K9 partner, “Deek.”

“Over the last eight years I have talked to him about everything under the sun, such as family issues, work issues, health issues and more as we patrolled the city of LaGrange,” Clower explained. “He always listened so diligently … with his head against the cage … and never told anyone any of our secrets. He never let me down in any situation. There was never anything I asked him to do that he didn’t do.”

The Belgian malinois and Clower became a team in March 2008 within the LaGrange Police Department’s K9 unit.

Deek was a dual purpose dog, said Clower. He was trained to sniff out narcotics as well as apprehend suspects that may be hiding in a building or on the run in the community. Deek was also instrumental in finding missing people, Clower said.

“He would find mainly elderly folks with dementia or Alzheimer’s,” he remembered. “The ones he found I know probably wouldn’t have made it through the night, but they did because Deek got to them in time. They were able to get medical treatment and were returned to their families. That was probably the most rewarding.”

His oldest daughter nicknamed the dog “Deeky Boy” when the officer first brought him home, and the name stuck until the day he died. The family even had a special routine when Clower and Deek arrived home at night.

“My girls would be waiting at the door for us and said, ‘We wanna see you and Deeky Boy dance,’ and I would make Deek dance for them,” Clower remembered. “Deek would jump up and put his front paws in my hands and we would do whatever dance they requested. I think he got pretty used to doing it and would be waiting for me to put my hands out when I got him out of the car.”

Deek not only protected the community as part of the LPD K9 Unit, but also kept watch over Clower and his family.

“He gained an inexplicable amount of trust from my family,” Clower said. “They knew when I would get called out in the middle of the night or during my regular routine shift to go search for someone who had just committed some type of serious offense, my partner ‘Deeky Boy’ would put his life on the line to ensure nothing happened to me.”

Deek had stomach surgery just over a month ago, Clower explained. The veterinarians also noticed the K9 had a pinched nerve in his neck that was making it difficult to walk. His health declined quickly, Clower said.

The last few days Deek was alive, Clower had to pick him up to go outside and hold his head up to drink out of his bowl. Clower made the tough decision on Monday to put Deek down and end his pain.

“This is 10 million times harder than I thought it would be,” Clower said. “It’s been tough … and hard for my family. I thought I had prepared myself for it, but it has been really rough for me.

“He was no doubt my best friend. It’s is just so hard to put into words and make someone who doesn’t do this for a living understand the relationship you develop with these animals,” Clower added. “I will truly miss him and can only hope my next dog is a fraction of the partner Deek was to me and my family.”

The outpouring of love and support from the community on the police department’s Facebook page has helped Clower and his family through the pain of not having Deek by their side, he said. But the K9 already has a special place in their hearts.

“Thank you for the prayers,” said Clower. “Deek will be greatly missed. I already miss him and thank him for everything he did for me and for this community.”

LaGrange Police Officer Joshua Clower plays with his Belgian malinois, Deek. The two were partners with the LaGrange police K9 unit. Clower said Deek was also part of his family.

http://lagrangenews.com/wp-content/uploads/sites/37/2016/08/web1_Deek1-1.jpgLaGrange Police Officer Joshua Clower plays with his Belgian malinois, Deek. The two were partners with the LaGrange police K9 unit. Clower said Deek was also part of his family.

LaGrange Police Officer Joshua Clower poses with his K9 partner, Deek, and his daughter Karsyn. His children liked to see Deek ‘dance’ with the officer at home.

http://lagrangenews.com/wp-content/uploads/sites/37/2016/08/web1_Deek2-1.jpgLaGrange Police Officer Joshua Clower poses with his K9 partner, Deek, and his daughter Karsyn. His children liked to see Deek ‘dance’ with the officer at home.

LaGrange Police Officer Joshua Clower washes his K9, Deek. The dog became part of his family and his best friend.

http://lagrangenews.com/wp-content/uploads/sites/37/2016/08/web1_Deek3-1.jpgLaGrange Police Officer Joshua Clower washes his K9, Deek. The dog became part of his family and his best friend.

LaGrange police K9 Deek stares at the camera. He passed away Monday at 8 years old.

http://lagrangenews.com/wp-content/uploads/sites/37/2016/08/web1_Deek4-1.jpgLaGrange police K9 Deek stares at the camera. He passed away Monday at 8 years old.