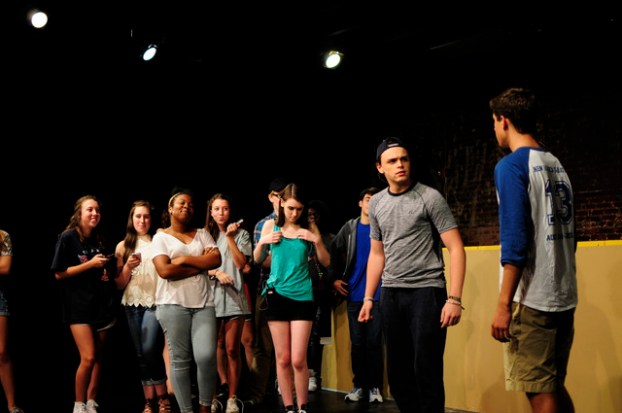 WEST POINT — We all remember the teenage years — awkward, tense, dealing with external and internal changes, and the oftentimes confusion of preparation for adulthood.

That nostalgia, both good and bad, is the focus of a new play coming to New Horizon Community Theatre, appropriately titled “13.”

“It’s a show about that transition period between childhood and becoming a young adult and trying to find your place when there’s a lot of restrictions,” said director Amy McDow. “Parents aren’t going to be ready for you to grow up and there are friends that are already starting to act like adults.

“It’ just like jumping in the mind of a middle school boy, and it’s just as inappropriate at times,” she added with a laugh.

The play does deal with some young adult themes and contains some adult language, but McDow said it is still suitable for teens and up.

The play focuses on Evan Goldman, a young Jewish boy from New York whose parents divorce and his mother moves him to Appleton, Indiana, just before his 13th birthday and bar mitzvah.

“He’s finding it very difficult to adjust to Indiana life,” said Liam McDonald, 16, of LaGrange, who plays Evan. “He’s trying to fit in with all these guys and trying to make new friends, but he finds himself in a situation where he has to choose between the geeks and the cool kids. He likes the geeks because they’re all cool and stuff, but he wants to be popular, so he has this internal battle pretty much the entire play about how he wants to fit in.”

This is McDonald’s second production. The first was with the Lafayette Theatre Academy’s performance of “I Never Saw Another Butterfly,” a stark contrast to the humorous musical “13.”

Jessica Connelly, 15, of Auburn, plays one of the geeks and Evan’s neighbor, Patrice. She hates Appleton, but develops a crush on Liam and becomes torn when he starts trying to impress and become one of the popular kids.

“She has the battle with herself, too, of whether or not she is good enough,” Connelly said.

Connelly has been in — appropriately — 13 plays in her previous town in Texas and in Auburn.

Composed by Tony award winner Jason Robert Brown, the music is one of the highlights of the show.

“I love the music in this,” McDow said. “It’s very addictive, and even before we thought about doing the show, I was listening to it, oftentimes on repeat. (It’s) very catchy.”

Another highlight is the humor.

“I like the overall humor, it’s pretty funny,” McDonald said. “Most of the songs are pretty catchy too, I wasn’t expecting that. … The songs are good, the characters are funny and all unique.”

The director, McDow, noted the show also includes a lot of dancing, and two of the 16-year-old cast members have been handling choreography.

“It’s pretty awesome to see them take this difficult a material up there on stage,” she said. “They did a great job.”

McDow said the almost exclusively teenage cast — 24 of the 25 cast members are under 18, with a few pre-teens — has made working on the show “a little more fun.”

“We laugh a lot,” she said. “There’s a lot of fun, and they’re so energetic and so talented, and it’s amazing to watch these young people take on something this big in such a short amount of time and pour their hearts into it, and … I’ve been more impressed than anything in this cast.”

Added cast member McDonald: “I like the overall humor, it’s pretty funny. Most of the songs are pretty catchy too, I wasn’t expecting that. … The songs are good, the characters are funny and all unique.”

Cast members from all around

“This is my first play at New Horizon,” said Macy Cardwell, 13, of Columbus, who is an ensemble geek cast member. “But I’ve been in plays before at Family Theatre and a few at the Springer Opera House in Columbus. … My mom saw the audition on Facebook and invited me to it.”

Cardwell has previous experience in plays and musicals, and has taken dance for eight years.

” … I like it,” she said of “13.” “Everybody’s really nice, and I’m not the only person who’s never been here (New Horizon), but a lot of people already know each other and they just welcomed me to the family.”

The story is similar for Adama Sall, 13, Phenix City, who said she has some prior stage experience, but added she feels most at home on stage and has aspirations to become an actress.

“I love acting and one day I went to the Springer (Opera House in Columbus), and I saw someone in their brochure for the show and they said they had performed at New Horizon Community Theatre, and I looked online and saw they were having auditions soon, so I thought why not get up there and try,” she said. “… It’s been wonderful, very exciting. I’ve never been to this town, but I like it very much.”

McDonald and Connelly both connected with the performance through previous interactions with McDow. The director was impressed with the commitment of the cast members and their parents who come to West Point for the numerous practices.

“They’ve traveled a long way and have awesome parents willing to sit here in the lobby and work while they wait for their kids,” she said. “As a mom that is driven to give my kids theatrical opportunities like this, I have a lot of respect for that. I appreciate it because it is taxing on the parents, but it’s totally worth it.”

‘There’s a lot of heart in it’

McDow and cast members hoped people will come to the show and see for themselves the work they have put into the performance.

“It’s funny, it’s got some fight scenes in it if you’re an action guy,” McDonald said. “… You’ll feel something toward at least one of the characters. There’s music, good music, fun music, catchy music. Lots of music.”

Noted the 13-year-old Sall: “The show is very exciting, and I think anyone that comes will be sure to have a great time.”

McDow said she fell in love with the show before it was even considered for an NHCT production. She feels others will also see its merits and maybe learn a little bit, too.

“I’ve never had more fun watching a production than I did the first time I saw this one,” she said. “The energy of the kids and the music that’s addictive and the storyline is nostalgic for anybody that’s ever been through middle school. And it also helped me to see my child, who was 13 at the time, in a different light. It helped me grow up as an adult and a parent to see — trying to remember what the world was like from that perspective. It’s a lot of fun and there’s a lot of heart in it.”

The cast of the upcoming New Horizon Community Theatre play ‘13’ react to the movie ‘The Bloodmaster’ during a scene rehearsal.

http://lagrangenews.com/wp-content/uploads/sites/37/2016/08/web1_web0814NHCT02-1.jpgThe cast of the upcoming New Horizon Community Theatre play ‘13’ react to the movie ‘The Bloodmaster’ during a scene rehearsal.

Patrice (Jessica Connelly) holds the hand of Evan (Liam McDonald) after he was punched by Brett (Trenton Golden).

http://lagrangenews.com/wp-content/uploads/sites/37/2016/08/web1_web0814NHCT05-1.jpgPatrice (Jessica Connelly) holds the hand of Evan (Liam McDonald) after he was punched by Brett (Trenton Golden).

A couple were behind bars in the Troup County Jail on Friday after they were discovered sleeping in a shed... read more