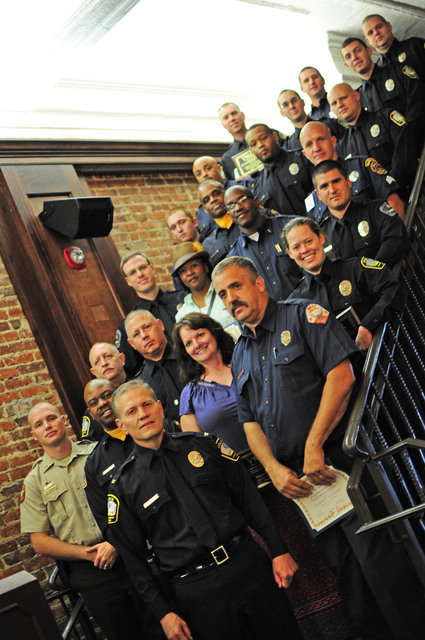 The awards ceremony, organized by the LaGrange-Troup County Chamber of Commerce, is aimed at honoring all public safety personnel while awarding those whose actions have stood out in the past year.

District Attorney Pete Skandalakis addressed the crowd before the awards were conferred.

“Without these people we would not be safe in our homes, in our businesses or in our parks,” he told the crowd. “… Most people run from danger. These are the people who run to the danger.”

The Lifesaving Awards, given for acts taken in a situation where an individual’s life is in jeopardy, were awarded to:

• Sgt. Lance Horne of the LaGrange Fire Department for providing medical assistance to a person found on the floor in severe chest pain. Horne used a defibrillator to stabilize the patient, who fully recovered.

• Deputy Matt Mayfield of the Troup County Sheriff’s Department for giving CPR and using an AED to revive a driver found on Interstate 85 not breathing and without a pulse. The driver is recovering.

• Firefighter/EMT Josh Wilson and firefighter Corey Jones of the Troup County Fire Department for giving CPR and using an AED to revive a 69-year-old man found not breathing and without a pulse in his home. The man is recovering.

The Medal of Merit

The Medal of Merit, given to public safety officials who have presented outstanding outreach programs to the community, was presented to two groups:

Communications Person of the Year

The Communications Person of the Year Award is given to an official who has performed his or her job with exceptional skill, expertise, innovation and results. It was awarded to Dodie Thompson for her calm response and staying at her post after receiving a 911 call that her husband was having a life-threatening medical emergency. Her husband is alive and well.

The Public Safety Unit of the Year Award is given to public safety professionals who have performed their jobs with exceptional skill, expertise, innovation and results. It was awarded to LaGrange Police Department’s K9 Unit, which participated in nearly 7,500 interactions while also providing assistance to other agencies.

Public Safety Person of the Year

The Public Safety Person of the Year has performed his or her duty with exceptional skill, expertise, innovation and results. This year’s recipient is Sgt. Tunya Brown of the West Point Police Department. A sergeant in the Alabama National Guard, Brown just returned from an overseas deployment and was selected to attend the new Warrior Leadership Training Course at Guantanamo Bay.

The Bronze Medal of Valor – given in situations where, during the course of an emergency, a public safety official or unit demonstrates extraordinary judgment in performance of duties – was awarded to:

• Officer Brady Pike from the LaGrange Police Department for subduing and arresting a man who attacked him after the officer responded to an incident at a park.

The Silver Medal of Valor, given for situations when a public safety officer knowingly exposes himself to great personal risk in the performance of an official act, was awarded to:

• West Point Fire Department’s “A” Shift for entering a home that was unstable after a tree had fallen on it and several people were trapped inside. Tragically, a baby was killed by the fallen tree, but the firefighters secured the scene for investigators and provided traumatic stress care to members of the family.

• Cpl. Clayton Bryant, Sgt. Steven Taylor, Officer Crag Wheeler, Officer Brandon Torrence, Officer Michael Willoughby, Officer Eric Vaughan, Officer Jared Askins, Officer Randall Bouchette and Officer Matthew Fowler of the LaGrange Police Department for negotiating and eventually apprehending a man having a mental health crisis, who said he was going to kill someone or they were going to kill him while standing outside of a house.

Front-line supervisors nominated recipients for all awards and a selection panel consisting of civilians reviewed the nominations and determined the winners.

Law enforcement officers and firefighters from local agencies who were honored during the Valor Awards line the steps at Del’Avant on Tuesday morning.

http://lagrangenews.com/wp-content/uploads/sites/37/2016/09/web1_web0914Valor01.jpgLaw enforcement officers and firefighters from local agencies who were honored during the Valor Awards line the steps at Del’Avant on Tuesday morning.