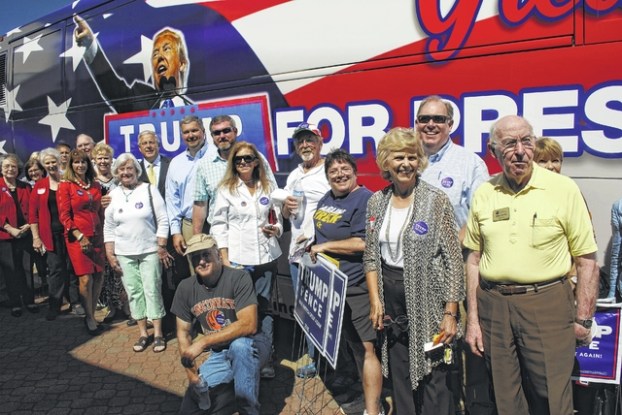 Approximately 70 people were on hand for the ribbon-cutting for the Troup County GOP and Trump-Pence headquarters in downtown LaGrange.

Rayna Casey, the Trump-Pence Georgia campaign chairman, rallied the crowd in front of a Donald Trump campaign bus, which was parked in front of the new headquarters located at 108 Greenville St.

Casey praised the GOP presidential nominee and encouraged people in attendance to get to the polls to vote for him. She said she has met Trump on several occasions and thought very highly of him. Casey used the words “polite,” “wisdom” and “leader” to describe what she called Trump’s integrity and professionalism.

“I think the significance is that we have a lot of volunteers that want a headquarters to come to gather together to come up with strategies to reach out to their neighbors and get the word out,” Casey said. “We just want people to come and volunteer. This is a great opportunity and a perfect location. It’s so easy to find because it’s right downtown and there’s parking next door. So, this is the place to be.”

She said the opening of the headquarters will have an impact on the election.

“The office is only as good as the volunteers. It’s just a brick structure, it’s not going to turn out the vote,” she said. “It’s these dedicated people that are obviously passionate about this campaign, and I’m very sure that Troup County will turn out the vote when it comes to the election voting.”

Troup County Republicans line up Monday afternoon in front of a Donald Trump presidential campaign bus during the local party’s ribbon cutting for the new headquarters in downtown LaGrange.

http://lagrangenews.com/wp-content/uploads/sites/37/2016/10/web1__DSC0015-1.jpgTroup County Republicans line up Monday afternoon in front of a Donald Trump presidential campaign bus during the local party’s ribbon cutting for the new headquarters in downtown LaGrange.

Lora Abernathy | For the Daily News

LaGRANGE — Cyclists chugged water as music filled Sweetland Amphitheatre on Saturday evening after they raised more than $400,000 for... read more