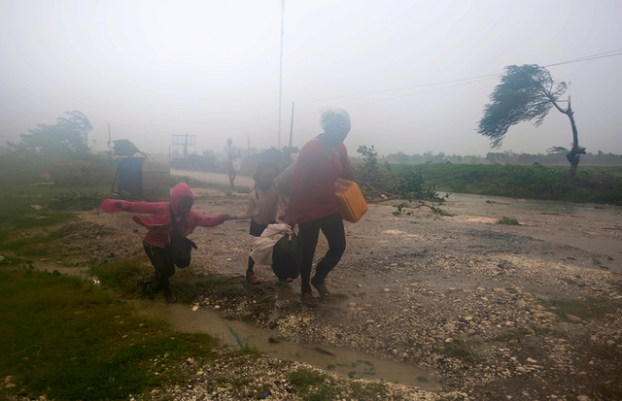 In the eye of the storm

LaGRANGE — For at least eight hours, LaGrange native Matt Bush and 18 orphans held each other tight and prayed as Hurricane Matthew roared onshore across the island nation of Haiti on Tuesday.

The children, along with 17 employees of the All Things New orphanage in Gressier, and their families, huddled inside Bush’s tiny cement block home as heavy rains pounded the roof and 145-mph winds howled outside.

The orphanage and Bush’s home took a direct hit from the Category 4 storm that ravaged the southwestern portion of the island.

All three were supposed to fly home on Saturday, but when the couple learned Haiti — and the orphanage — was in the path of Hurricane Matthew, Matt Bush decided to stay behind. He needed to protect the couple’s other children: 18 Haitian orphans with nowhere to go.

Jessica Bush and Sophie Bush kissed him goodbye on Sunday and flew home to Jacksonville.

“I’ve had a couple sleepless nights here,” Jessica Bush said in a phone interview Tuesday afternoon. “Just leaving him at the airport was hard. The move to Haiti was hard, but this was a lot harder. But I know this was 100 percent the right decision.”

She was not the only one keeping tabs on him and the storm on Tuesday.

His parents and two sisters in LaGrange received weather updates, silently prayed, and helplessly watched as the hurricane ravaged one of the poorest countries in the western hemisphere.

“My husband has been keeping tabs on it,” said Mike Bush, Matt Bush’s mom. “I started to read about it and what was going on … the flooding … people swept out to sea … and I got too scared. They (son and orphans) were directly in the path.”

Much of the island nation is still in ruins from the catastrophic 7.0 magnitude earthquake that struck the country in January 2010. The epicenter was located in the city of Léogâne, about 15 miles west of Port-Au-Prince, Haiti’s capital city, and less than seven miles from Gressier and the All Things New orphanage.

“It’s just one hit after another for the country,” Jessica Bush said. “Some people were just getting back on their feet from the earthquake, and now this … I was very scared. I hate being here (Jacksonville) with all of them (Matt, children) there. One of my biggest fears is we would lose communication with them. So far, we haven’t.”

Somehow, beneath the massive wall clouds, torrential rains and violent winds, the couple’s home sustained electricity and cell service. Matt Bush called and texted his wife almost every hour Tuesday afternoon from Haiti with updates on the storm and their children.

“He said the rain’s been constant and very hard,” Jessica Bush said. “Our back yard is under water … we have some plantain trees in our back yard and those came down. But the roof was fine. We have a very sturdy house … and everyone was safe.”

“We got a text from him … that said, ‘We made it! It was not fun, but we’re okay,’” Mike Bush said. “I’m an educator and I was taking kids to lunch when I got that (text). I had to leave and go into a work room … I just lost it. I broke down and cried and cried. I was so thankful they were OK.”

“It was a very emotional day…,” said Suzie Cook, Matt Bush’s sister, “just knowing all they could do was sit there and wait for the storm to hit. That was hard for me.”

While communicating with his family was Matt Bush’s first priority, he called the LaGrange Daily News late Tuesday afternoon from Haiti with an update on the storm.

“We still have 75-mph winds blowing through and still have a lot of rain,” Matt Bush said. “At one point, I drove down the road from our home and saw a lot of standing water. I decided not to try to drive down to the main road just yet.”

Thirty-five people, including the orphans, hunkered down in the Bush home to ride out Hurricane Matthew, he said. While they escaped relatively unscathed from the storm, he knew other Haitian families were not so fortunate.

Nine people died in the storm, the Haitian government confirmed Tuesday evening, but officials warned that number was expected to rise exponentially over the next hours and days.

But Matt Bush still stands by his decision to face the storm head-on with the people he now considers family — in a place he now calls “home.”

“It was definitely the right decision to send my wife and daughter ahead and I stay back with the kids. Especially since the little children were really scared,” he said.

Matt Bush’s family said they, too, fully supported his difficult decision to stay in Haiti.

“We are so proud of him,” said Katie Willis, Matt Bush’s sister. “He made a tough decision to not come home with his family. But he knew in his heart what he had to do … those children are his family, too. We are proud of him for keeping them safe and protected.”

Depending on the amount of damage from the storm, Matt Bush may be reunited with his wife and daughter in Jacksonville as early as Saturday.

But if he is hoping to put the storm behind him, he may be out of luck. As of Tuesday, Hurricane Matthew is expected to make landfall in Jacksonville on Saturday, according to the National Weather Service.

Matt and Jessica Bush will be a part of a fundraising event at the First Baptist Church on the Square 5 p.m. Sunday, Oct. 23, with dinner included. They will talk about the orphanage and their mission in Haiti in great detail.

Residents head to a shelter in Leogane, Haiti, Tuesday. Matt Bush, a LaGrange native, was in Haiti when Hurricane Matthew struck. He stayed behind to help protect children of the All Things New orphanage while the Category 4 hurricane roared across parts of the island.

http://lagrangenews.com/wp-content/uploads/sites/37/2016/10/web1_Tropical-Storm.jpgResidents head to a shelter in Leogane, Haiti, Tuesday. Matt Bush, a LaGrange native, was in Haiti when Hurricane Matthew struck. He stayed behind to help protect children of the All Things New orphanage while the Category 4 hurricane roared across parts of the island.