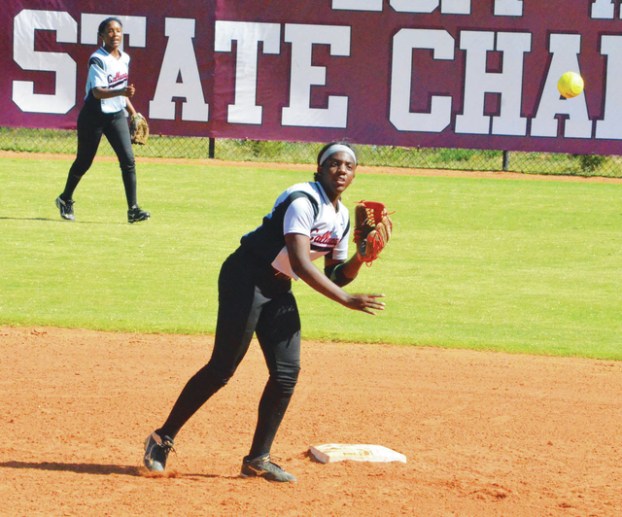 It’s on to state for Lady Cavaliers

FRANKLIN – Skylar Rice delivered her first varsity home run, and Oeisha Jenkins stayed hot with a long-distance shot of her own, but it wasn’t enough to keep the Callaway Lady Cavaliers from falling to Temple 15-9 in Saturday’s third-place game in the Region 5-AA softball tournament.

Earlier in the day, the Lady Cavaliers were beaten by Lamar County 12-0, denying them a chance to play Heard County for the region championship.

Callaway got off to a slow start against Temple and trailed big, and despite the home runs by Rice and Jenkins, it was unable to make it all the way back.

Callaway will be the region’s number four seed, and it will play at Region 8-AA champion Rockmart on Wednesday in the first round of the state tournament.

Those two teams will play a doubleheader on Wednesday at 3 p.m., and if needed, a third game would be Thursday at 5 p.m.

Callaway beat Temple twice in the regular season, but it was unable to make it three in a row.

“We’re good enough to beat that team. We beat them twice throughout the year,” Callaway coach Ashley Summerlin said. “And we came out here today and absolutely laid an egg. But that’s what happens. They wanted it more than we did. We didn’t do the things it takes to win. And that’s my fault. I’ve got to get them ready to play. You’ve got to be ready to go, and obviously they weren’t today.”

After struggling to find any offensive success against Lamar County, Callaway did at least put some runs on the board against Temple.

Rice did her share of damage with three hits and three RBIs, and she had a two-run homer in the fifth inning.

Rice also split the pitching duties with Jenkins in the two games.

After Temple scored three runs in the top of the first inning, Callaway answered with a single run in the bottom of the inning.

Kelly Carlisle led off with a single and moved to third on an error, and she scored on a Rice base hit.

After falling behind 6-1, Callaway got within two with three runs in its half of the second inning.

With two runners on, Carlisle reached on an error, allowing Acia Stephens to score a run.

Jasmine Dukes followed with a two-run single, and Temple’s lead was down to 6-4.

Temple pulled away from there, although the late home runs did keep Callaway within shouting distance.

In the bottom of the fifth, Carlisle reached on her second hit of the game, and two batters later, Rice hammered the ball over the right-field fence for a two-run home run.

Jenkins followed with a double, but she was left stranded.

Callaway came to bat in the seventh inning trailing 15-6, so it was in need of a miracle comeback.

The inning started out in fine fashion.

Dukes and Rice reached on back-to-back singles, and Jenkins then ripped the ball over the left-field fence for the three-run homer.

Kourtney Greer reached on a one-out single, but Callaway was unable to push any more runs across, and Temple won by nine.

In the earlier game, Lamar County took control with two home runs in the second inning, and it ended up winning in five innings.

In the championship game, it was Heard County beating Lamar County 4-3.

OF NOTE: For more photos from Callaway’s games, check out facebook.com/LDNsports

Callaway’s Skylar Rice is greeted after hitting a home run in a region-tournament game against Temple. Rice had three hits in the game. Kevin Eckleberry | Daily News

http://lagrangenews.com/wp-content/uploads/sites/37/2016/10/web1_softball1-1.jpgCallaway’s Skylar Rice is greeted after hitting a home run in a region-tournament game against Temple. Rice had three hits in the game. Kevin Eckleberry | Daily News

Callaway senior Acia Stephens takes a swing during a loss to Temple in the region tournament. Kevin Eckleberry | Daily News

http://lagrangenews.com/wp-content/uploads/sites/37/2016/10/web1_softball16.jpgCallaway senior Acia Stephens takes a swing during a loss to Temple in the region tournament. Kevin Eckleberry | Daily News

Callaway second baseman Kourtney Greer makes a throw to first for an out during the region tournament. Kevin Eckleberry | Daily News

http://lagrangenews.com/wp-content/uploads/sites/37/2016/10/web1_softball14.jpgCallaway second baseman Kourtney Greer makes a throw to first for an out during the region tournament. Kevin Eckleberry | Daily News

Early game no problem for Panthers