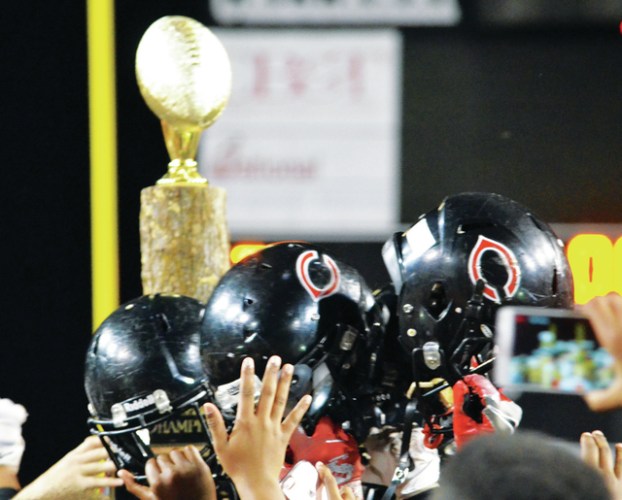 LAGRANGE – The Pulpwood Classic Trophy is remaining with the Callaway Cavaliers.

More importantly, though, the Cavaliers (7-0 overall) are still unbeaten, and they moved to 2-0 in Region 5-AA with a 24-14 victory over the Heard County Braves on Thursday night at Callaway Stadium.

The long-standing rivalry was amped up a bit when the two schools began playing for the Pulpwood Classic trophy in 2012.

Heard County won that game in 2012, but Callaway has won each game since then, and this year’s showdown took on added importance since the two teams are in the same region.

Heard County scored a touchdown on its first possession, but it didn’t score again until there was less than a minute left in the game and the outcome had already been determined.

It was a complete performance.

While the offense didn’t produce many big-yardage plays, the Cavaliers were able to move the ball well, primarily on the ground with Atkins, a junior running back, enjoying a big night.

Callaway’s defense, meanwhile, was suffocating after giving up a touchdown on the game’s first possession.

Heard County was unable to get much done offensively, especially after its standout quarterback, Emory Jones, left the game with an injury in the first quarter.

Jones, a junior who has verbally committed to Ohio State, didn’t return.

“It’s a tough ballgame,” Callaway head coach Pete Wiggins said. “Heard County has a great football team. Coach (Tim) Barron and his staff do a great job. And we knew it would be a tough, hard-nosed game. I’m just proud of the kids for their effort and focus throughout the week at practice.”

While Heard County hadn’t played a game in more than two weeks, Callaway was coming off a 38-7 road win over Lamar County six days before.

“We had a short week, and we stayed focused and we came out and we stuck to our game plan, and got the win tonight,” Wiggins said.

Unless the two teams end up meeting in the state playoffs, Callaway’s seniors will leave high school with a 4-0 record against Heard County.

“We came in with a three-game winning streak against Heard County,” Callaway defensive lineman Keegan Woods said. “To get this win our senior year, it’s amazing.”

Heard County, showing no signs of rust despite the extended layoff, drove 87 yards in six plays to put the first points of the game on the board.

Jones completed a 61-yard pass to Jaden Moreland to put the ball deep in Callaway territory.

Jones capped that drive with a 4-yard touchdown run on third down, and Trey Wiggins made the extra point to give the visiting team a 7-0 lead.

Barron, looking to keep the momentum going, called for an onside kick, and it was executed perfectly by Wiggins, and the Braves recovered.

Callaway’s defense was up to the challenge, forcing a three-and-out and a punt.

On third down, it was junior defensive lineman Lichon Terrell getting pressure on the quarterback to force an incompletion.

From that point on, Callaway’s defense was in control.

“Our defense played so well,” Wiggins said. “I’m proud of those kids. They played fast, and they played physical. Coach (Dusty) Hubbard and the defensive staff did a great job preparing the kids.”

The defense made another stop later in the quarter, and the Callaway offense took over at its own 42-yard line.

On third down, Johnson threw a dart to Braylon Sanders for a 15-yard completion on the sideline, and that gave the Cavaliers a first down at the 20, and Atkins followed with a 10-yard run.

One Atkins touchdown run was wiped out by a penalty, but he ended up scoring on a 9-yard run a few plays later, and Stephens made the extra point to tie the game at 7-7 with 9:46 left in the half.

Later in the half, Callaway took the lead with a 10-play, 60-yard drive, and all of the damage was done on the ground.

Johnson capped that drive with a 13-yard touchdown run, and Stephens made the extra point, and Callaway led 14-7, which was the score at the half.

Barron, hoping lightning would strike twice, called for another onside kick to start the second half, but Callaway recovered and began the possession at its own 48-yard line.

The Cavaliers marched down the field and needed nine plays to score their third touchdown of the game.

On first down from the 12-yard line, Freeman took a handoff from Johnson, and he scored on a 12-yard run, and Stephens’ extra point pushed the lead to 21-7 with 7:05 left in the third quarter.

Moments later, Jamie Sellers recovered a fumble, and Callaway was in business at the Heard County 25-yard line.

Heard County’s defense stood firm, but Stephens nailed the 42-yard field goal to push the lead to 24-7 with 3:10 to play in the third quarter.

Heard County capped the scoring with a 2-yard touchdown pass from Alijah Huzzie to Moreland with 33 seconds left in the game.

Callaway will look to improve to 8-0 with a road win over Temple next week, and it caps the regular season with home games against Spencer and Jordan.

OF NOTE: For more on Thursday’s game, see Saturday’s sports section. And for more photos from the game, check out facebook.com/LDNsports

Callaway quarterback Dylan Johnson gets a pass away during the first half of Thursday’s win over Heard County. Kevin Eckleberry | Daily News

http://lagrangenews.com/wp-content/uploads/sites/37/2016/10/web1_CHS3.jpgCallaway quarterback Dylan Johnson gets a pass away during the first half of Thursday’s win over Heard County. Kevin Eckleberry | Daily News

LaGrange defensive lineman Lichon Terrell gets into the backfield.

http://lagrangenews.com/wp-content/uploads/sites/37/2016/10/web1_CHS12-1.jpgLaGrange defensive lineman Lichon Terrell gets into the backfield.

ROCKMART – The season came to a close for the Callaway High softball team with a loss to Rockmart on... read more