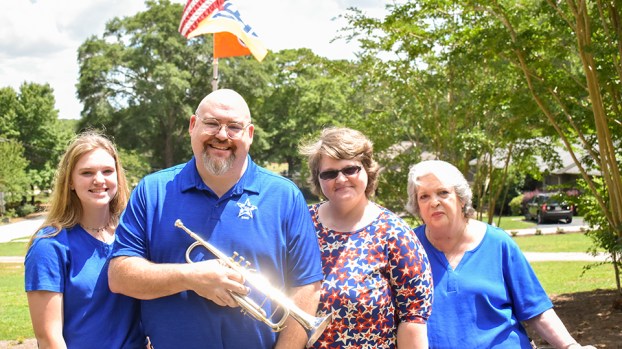 The Farrell family poses for a photo after Jarrett Farell played “Taps” in their front yard in LaGrange on Monday. Pictured from left to right is Savannah Farrell, Jarrett Farrell, Kelli Farrell and Amanda Farrell. — Dustin Duncan

LaGrange High Band Director Jarrett Farrell stood in the driveway of his home near Granger Park at 3 p.m. and played the 24 notes that make up “Taps” for a small audience of about 10 people.

His wife, daughter and mother stood behind him as he found a way to participate in Memorial Day to honor his grandfather, friends and students who have served in the military. 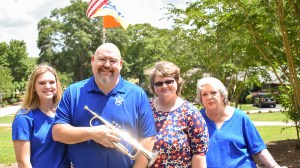 The Farrell family poses for a photo after Jarrett Farell played “Taps” in their front yard in LaGrange on Monday. Pictured from left to right is Savannah Farrell, Jarrett Farrell, Kelli Farrell and Amanda Farrell. — Dustin Duncan

He learned of his opportunity to get involved this Memorial Day even during COVID-19 through CBS News correspondent Steve Hartman who teamed up with retired Air Force bugler Jari Villanueva to pay “Taps” at 3 p.m. across the country in each time soon.

“Taps” is a song traditionally played at funerals for members of the U.S. armed forces. It is also usually played at Memorial Day and Veterans Day ceremonies.

Farrell said with most of the usual celebrations being canceled due to COVID-19, it was nice to have something for people to see and hear and to correlate with Memorial Day.

“Those comments are made every year that Memorial Day is a great day for family barbecues, but let’s not forget what it’s about,” he said.

Farrell said while he isn’t military himself, his grandfather fought in War World II and many other members of his family served in the military. He said he’s also attended many military funerals with U.S. flag draped across a veteran’s coffin, the 21-gun salute and “Taps” being played in the background.

“It’s 24 notes, but it’s very poignant and has meaning,” Farrell said about “Taps.” 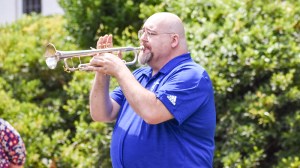 Additionally, Farrell said he’d taught several students who have gone on to the military.

“As a teacher, I have had students who have joined the armed forces over the years, and I’ve had a few who gave their lives,” Farrell said. “So, sure, there is a personal connection to remember some of the young people that I’ve taught.”

He said it’s a small thing to play 24 notes Monday afternoon, but it gives him a chance to do something for his family, students and other veterans who have given their lives for America’s freedoms in the past.

“We all need to think about what those people did for us, and this was my way of participating today,” Farrell said.

LANETT — Because of COVID-19 and the restrictions in place to deal with it, Springwood seniors gave up their classes,... read more