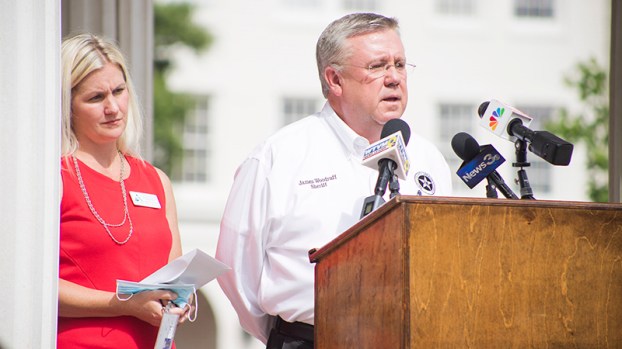 The Troup County Sheriff’s Office announced Tuesday that 71 inmates tested positive during last week’s mass testing, which provided a test to every inmate at the Troup County Jail. A total of 21 inmates refused testing, and three were pending and will be re-tested, according to Obasanjo.

Overall, 107 inmates have tested positive at the jail since the start of the COVID-19 outbreak, according to Sgt. Stewart Smith, but those inmates were not all in the jail at the same time.

Woodruff said Wednesday that the solicitor’s office, superior court, magistrate court and law enforcement offices are working together to get inmates with non-serious crimes out of the jail.

“They are looking at each individual charge and each individual person … They are working with us, working with the public defenders,” Woodruff said. “It still takes the public defenders, and it still takes the lawyers representing these people to get involved. The district attorney’s office cannot do it alone and neither can the solicitor’s office.”

He said law enforcement agencies have also done their part to keep as many people out of the jail as reasonably possible.

“They agreed with us that we want to keep as many out of jail as possible, so they are citing them, giving them a court date and releasing them on minor charges,” Woodruff said. “I want to thank our police departments and our other law enforcement partners for that.”

Woodruff said one group of inmates that has been in quarantine will be back into the jail’s general population this Friday.

“We actually kept them in quarantine for three weeks, a week longer than normal, just to make sure they were fine to go back in the general population,” Woodruff said.

The jail has been using the annex building to separate COVID-19 positives from the rest of the inmates at the jail, but Woodruff said it’s complicated.

“There are two things we have to do. We have to get them away from the general population, but we also have to be mindful of their charges,” he said. “We can’t put people who are dangerous with a young kid who is in there for driving on a suspended license. So, we have two challenges. One, get them away from people who are not positive. Two, put them in a place where they can quarantine for 14 days and not be a danger to each other.”

Woodruff said a specialist from the CDC would be touring the jail Thursday to see if there’s anything they can do differently to stop the spread of COVID-19.

“I am welcoming her to come. I am the first to say I am not an expert at this, and this is new territory for us. We are feeling our way through it and trying to do the best we can with the information we have.”

Following the press conference, Woodruff invited the media to the jail Wednesday afternoon and showed the solution being used to keep the facility cleaned.

The jail is being cleaned three times a day, and the solution is sprayed throughout the jail.

The number of COVID-19 cases in Troup County continued to rise on Wednesday, as the Georgia Department of Public Health... read more