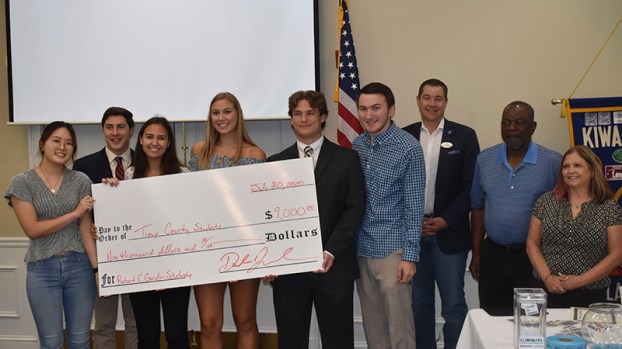 The Kiwanis Club of LaGrange awarded $9,000 to graduating high school seniors as part of its Robert E. Gordon Scholarship presentation on Thursday at Highland Country Club.

The money was split between seven scholarships given to Troup County students who have “demonstrated a potential for leadership, excelled in academics, with extracurricular activities rich in service to the community and to their fellow human beings.”

This year’s recipients were Kennedy Bowen, Shaylee Smith, Kate Moore and Collin Sanders of Troup County High School, as well as Haein “Ella” Cho, Jared Nation and Dylan Almon of Callaway High School. Bowen and Cho received $2,000 each, while the rest of the recipients were given $1,000.

Kiwanis scholarship committee chair Elia Baltes said LaGrange High School is not eligible due to it not having a Key Club chapter, though she is working on trying to establish one there.

“I thank you all for coming and being willing to show up today so that we can celebrate this scholarship and your students,” Jackson told the audience of about 45 people.

Each recipient briefly introduced themselves and their family to the audience and summarized their post-grad plans.

Former club president Jerome Alford wished the students well in their future and asked them to give back to their community someday.

“You all are the future, and so Kiwanis is trying to boost you … to become the lead citizens of our community.” Alford said. “But don’t forget LaGrange — when you get all that knowledge, come back and help us out.”