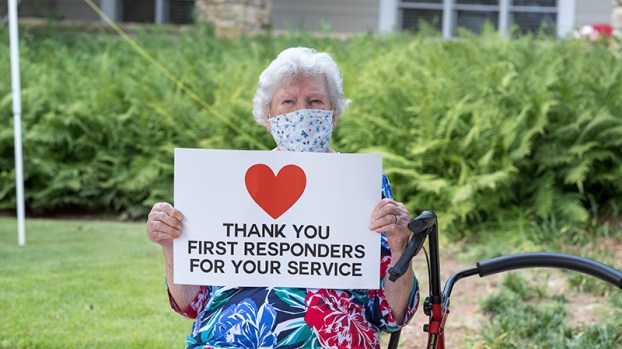 From 11 a.m. to 2 p.m. members of AMR, LaGrange Police, LaGrange and Troup Fire Department and the Troup County Sheriff’s Office drove thru the Vernon Woods Retirement Community to be thanked by the residents for their service.

“With the pandemic being what it is right now, and it’s affecting our ability to do community events, we wanted to do something to show the community that we are still here we’re still a vibrant group of people,” said Vernon Woods Sales Director Patricia Rogers. “This group of residents, who are known as the greatest generation, have a deep respect for first responders. 9/11 is a day that is especially important to all of us here at Vernon Woods.”

Rogers said it was important to the residents that they spent time to recognize first responders in the community.

“This drive-thru event was just another way we could have a community event during the pandemic as well,” Rogers said. “They were super appreciative, especially the EMT’s who do respond to calls. They are especially close to us.”

Rogers said that the ambulance comes out once a week for residents and the fire department is continually checking on their system to make sure the building is safe.

“We just have a deep appreciation for all of our first responders for taking care of our community,” Rogers said.

Mona Gamble, a resident of Vernon Woods, said she especially wanted to be a part of the drive-thru event to share her appreciation.

“We all have kinfolks who have served or who have served in the military,” Gamble said. “With today being the 19th anniversary of 9/11 it is especially important to recognize the first responders. Every time I hear that phone call where the man in the last plane that went down called his wife, I can’t help but feel emotional.”

Another resident, Mary Marlow, said she could remember exactly where she was when the two towers fell.

“We had just moved into our new home in Kentucky,” Marlow said. “I was sitting in my basement watching the television. It was happening live, right before my eyes. It was unbelievable seeing it happen and I just didn’t want to believe it.”

Marlow said she got up Friday morning and listened to all the live recordings of victims on the plane calling their family members.

“It is such an unbelievable terrible thing,” Marlow said. “So today, I got up and wanted to show my patriotism for the country.”