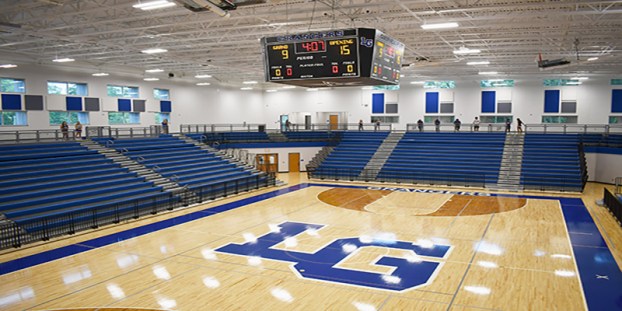 Since 1954, the gym at LaGrange High School hosted countless games and has seen thousands of athletes play in meaningful games. However, decades of usage put heavy wear, tear, unfillable holes and rust onto the building.

On Tuesday, almost 70 years later, LHS opened its all-inclusive, state of the art facility for every sport to use.

“I have probably cried four times during the ceremony because that’s how excited I am,” said LHS Athletic Director Coach Mike Pauley. “This means the world to what we are doing in this community. Now that we’re in 2020, it was time to make that transition from that gym and move to a new facility.”

Pauley said the roof of the old gymnasium had more than 100 leaks and the foundation was falling apart.

“The tradition that gym gave was phenomenal, but it is time to start new traditions,” Pauley said.

Three years ago, funds were approved for a new athletic complex at LaGrange High that included a gym and an indoor practice facility. The facility, which was paid for by E-SPLOST funds, included a gym with room for more than 2,000 spectators. According to previous reporting, the LHS gym had a guaranteed maximum price point of $15.5 million via TCSS’ agreement with contractor Ra-Lin.

“As I arrived to the county last year and I was told about all the projects that were going on that were paid with E-SPLOST money, I took an assessment of that immediately,” said Troup County Schools Superintendent Dr. Brian Shumate. “I am very, very blessed to be here and be a part of this community. To be a part of a community that is willing to invest in their schools like they are. We’ve been very impressed and this thing is unbelievable. It is not just an asset for the school and ticket sales but for the entire community”

The gym has bleachers on three sides, and on the fourth side fans will be able to stand and see the action on the floor.

The complex also features an indoor practice facility that can be used by the different teams at the school. It is 40 yards long, and 53 yards wide.

“It provides equitable opportunities for girls and boys,” Shumate said. “It is important how functional it is. All kinds of events can be held here. It is truly a centerpiece for this community, to keep kids in and keep them safe and keep them active.”

There is also a large practice room for the wrestling and competitive cheerleading teams.

LHS Principal Alton White said that this room can also be used as a warm-up room for visiting teams.

He added that in the past cheer and wresting teams have reached out to request LHS as the home for sectional and state competitions, but it was never possible due to space.

There are new locker rooms, as well as state-of-the-art weight room, meeting rooms, a training room and offices for the coaches.

White said the old gym had served them well, and he saw a lot of amazing and exciting games in it.

“All types of championships were done in there,” White said. “On one hand, we are gonna kind of miss the intimate atmosphere of the old facility, but now to have something that is state of the art is amazing.”

LaGrange’s Gibbs off to sizzling start

By KEVIN ECKLEBERRY Daily News What a start to the season it’s been for LaGrange High’s Kale Gibbs. After running... read more