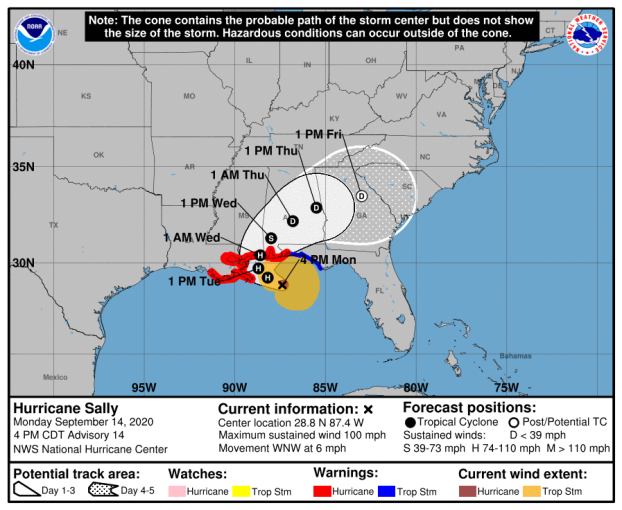 If you’re having a hard time keeping up with the number of tropical storms and hurricanes in the Atlantic Ocean right now, know that we understand.

As of this writing, there were five named storms in the Atlantic Ocean alone. The most ominous at this moment is Hurricane Sally, which is getting closer and closer to the Louisiana shore.

Sally is expected to hit as a category one or category two before taking a sharp right turn through Alabama and Georgia.

Eventually, the rainy weather is supposed to impact East Alabama and West Georgia, though flooding is probably the biggest concern.

However, a tornado can’t be ruled out, according to the National Weather Service.

The rain could impact Friday’s football games, but it might also already be gone by then.

The timing is hard to pinpoint at this point, but we’ll keep you posted with updates as the remnants of the storm head this way.

Sally and all of the other storms in the extremely active Atlantic Ocean are a good reminder that we should all prepare for severe weather.

Now is the time, not later.

Although it’s unlikely, though not impossible, for a hurricane to impact our area this far inland, those storms bring all types of other problems.

Sally appears set to soak the coast of Louisiana, Mississippi, Alabama and Georgia, and we’re sure it’ll bring plenty of wet weather our way.

Talk to your family about flooding and what you’ll do any time Troup County falls under a tornado warning.

It’s always best to plan ahead and prepare for the worst, and then hope that day never comes.

We’ll keep you posted as the storm makes its way inland, and watch if it continues on its turn this direction.

The critical lesson from Versailles