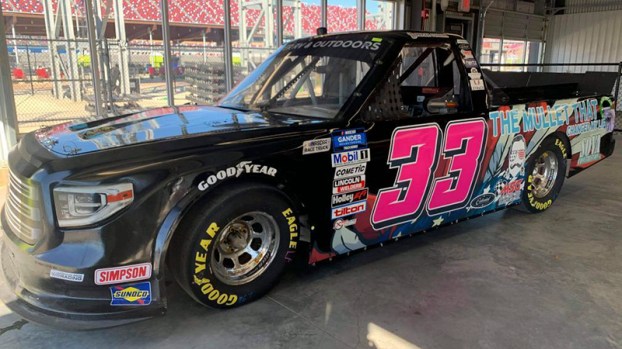 Above, the Toyota #33 truck in last weekend’s NASCAR Gander RV & Outdoors Truck Series at Talladega Superspeedway. Local barbershop, the Bearded Lady, had its logo featured on the truck.

Kari Baker opened her barber shop, The Bearded Lady, less than two weeks before COVID-19 caused businesses to shut down. But since reopening, she said business has been great. This past Saturday, Oct. 3, she had something else to be excited about.

The Bearded Lady logo was featured on the Toyota #33 car in the NASCAR Gander RV & Outdoors Truck Series at Talladega Superspeedway. The logo was on top of the truck’s bed with several other logos, with the car driven by racing driver Josh Reaume.

Baker watched the race from home, and Reaume drove the car home to 23rd place among 38 cars.

“It was just a really cool opportunity and just something fun that LaGrange was in Talladega, LaGrange was on TV,” Baker said.

Baker had heard about the opportunity from entrepreneur Lance Liggett, who owns a clothing company called Thigh Huggers, and who Baker had previously met through social media. 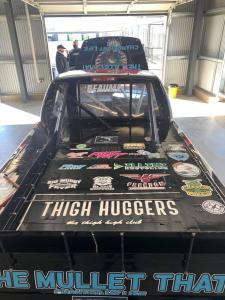 The Bearded Lady logo on the truck, located near the top left corner of the top of the truck bed.

Liggett told her about Keith McGee, a racing driver and disabled Air Force veteran who was trying to race at Talladega in the truck series, and asked if she’d like to get her logo on the car.

“I donated, to kind of help get him there because … he’s a veteran,” Baker said, “And you know, this is his dream, and it’s just something kind of cool, so why not?”

Reaume ended up driving the truck, due to strict COVID-19 rules about who could practice and race at Talladega. Reaume will race the truck again in Daytona in February, Baker said.

McGee is part of the Reaume Brothers Racing roster but will not be able to make his NASCAR debut until 2021.

Baker said McGee’s car is special because it’s sponsored by “the public” — namely small businesses and users from a Facebook group called “The Mullet That Changed My Life.” The group has 58,000 members and celebrates mullets. Many members donated, along with 19 official sponsors.

Baker’s son has a mullet, and has cut many mullets for customers. McGee also sports one, as does Liggett.

“It was just kind of through the grapevine,” Baker said.

Heard Sheriff: No evidence of foul play in Natalie Jones case, car in woods ‘had been there a while’

The Heard County Sheriff’s Office has not found any evidence of foul play in the disappearance of Natalie Jones, Sheriff... read more