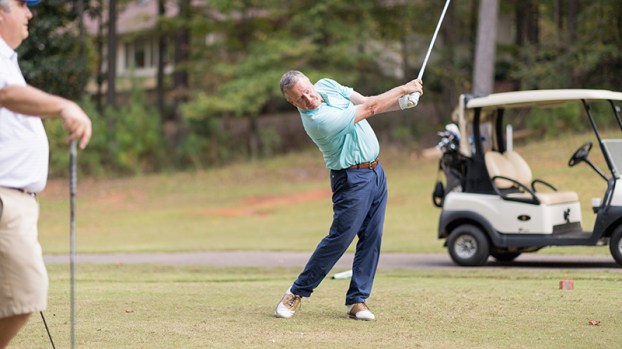 The LaGrange-Troup County Chamber of Commerce teed off its annual golf tournament Thursday morning at Highland Country Club with more than 30 teams participating.

Following the theme of 2020, the chamber named this year’s tournament the Maskers 2020 Golf Tournament playing off of the word ‘masks.’

“We also have a fall Master Tournament this year in the fall, which is the first time ever it’s in the fall due to COVID,” said Tournament Director Jamey Jackson. “We wanted to play on that as well.”

Jackson said the tournament provides an opportunity for players to vie for fun and prizes while making business contacts.

He added that golfers get a day networking as they play through the 18 holes.

Each year, the chamber hosts the tournament at The Fields or Highland Country Club.

Jackson said that the annual chamber event sets them up to be able to pay for chamber events through the next year.

“With it being relatively in its infancy stage, I’m really happy to have 34 teams out of a max of 46,” Jackson said.

“At the end of the day, our goal when we started planning this was what can we do to let people have the most fun. We’ve been in the year 2020, which has just been a year where fun is not really the word that I would use for a lot of things that have happened.”

Jackson attributes the success of the tournament to sponsors and teams that enter every year.

“We are so grateful to our sponsors for making today possible,” Chamber President and CEO Connie Hensler said.

“The weather was perfect and the participation was great. We can’t wait to see everyone again next year.”

This year’s presenting sponsor was J. Smith Lanier & Company that gifted each player a bottle of Wild Leap Vodka and a specialty cup with the Maskers logo on it.

Jackson said they were able to come up with a logo that used the Masters font and theme with a mask on it.

Additionally, the chamber had other small ways to win as well, including longest drive and closest to the pin.

To add an extra flare to the tournament, players could pay $5 to take a shot of Fireball whiskey, in a kilt, and attempt a drive.

The Lafayette Society for Performing Arts (LSPA) is kicking off its 2020-2021 season with “The Show Must Go On!” at... read more