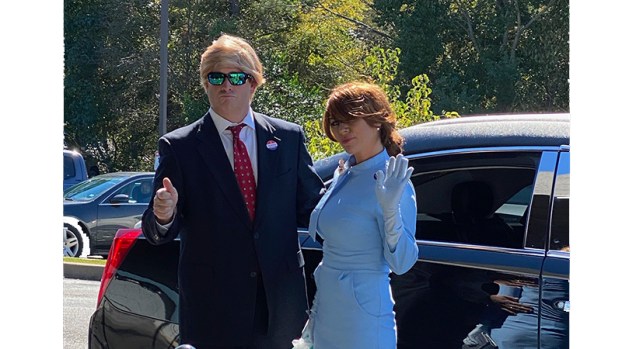 When LaGrange native April McLaughlin Box and her husband, Brad, showed up to vote on Friday, some might’ve thought Donald Trump himself was making an appearance.

Brad and April, who was Miss Troup County in 1998, dressed up as the president and first lady to cast their ballots in Tyler, Texas, which is where they live now. Brad dressed up as Donald Trump, in a full black suit, a red tie and wig, and April dressed as Melania, in a light bluish-purple dress and wig.

They completed the look by renting a limousine, which pulled up right to the polling location.

April said she got the idea after plans for her birthday were thrown off by a golf cart accident. Instead, she told her husband that she wanted him to dress up as Donald Trump for Halloween.

“I started coaching him on how to do the clap, clap and the thumbs up,” April said.

She said that Brad had no idea that she had plans for them to vote as Donald and Melania, but once she brought it up, he was hesitant at first.

However, he came around.

“He ended up having more fun than I think he ever thought he would,” she said.

April said she called a local limousine company, Rosewood Memorial Funeral Home, to secure a limousine for their drive to the polling place. Another friend acted as security as they got out of the vehicle.

“[Our limo driver] said ‘this is the most fun I’ve ever had in my life,’” April said.

April said she expected that she might have to remove her wig so that poll workers could check her ID, but she didn’t have to.

“I was prepared for the fact that I was going to have to remove my wig because of ID, but she didn’t [make me],” she said. “She did look at it a couple of times, and I was like ‘people can change their hair color.’”

April has several family members that still live in LaGrange, including her mother, Sharon Spriggs. April’s family also owned Waid Tire in LaGrange for more than 80 years. The business officially closed in August of this year.

April said her love of Trump is partly in honor of her dad, Tom McLaughin, who was the longtime owner of the business.

“He was a massive Trump fan and died two days after Trump was elected,” April said. “At the very beginning, I didn’t know it was going to work out with Trump. I talked to dad and he gave me all the information, and I became a huge Trump fan. If my dad liked somebody, that meant they were good people.”

April said she favors Trump because he’s someone people can relate to.

“He’s just like every other person on this Earth,” she said. “He’s just not afraid to show that’s who he is.”

It’s not clear if Texas election law would prohibit wearing a costume to vote.

April said she and Brad drove to another polling place to make an appearance after voting, but they were told they needed to be across the street.

She said no one should be offended by them voting as Donald and Melania.

“Somebody asked, ‘what would you say to the people who are offended by it?” she said. “My comment to that is ‘congratulations to you because you have such a great life that you don’t have anything other to worry about other than somebody you don’t know in Tyler, Texas that dresses in attire that doesn’t affect you in any other way.”

Ferguson tests positive for COVID-19 after attending campaign event in Hogansville with governor, other elected officials