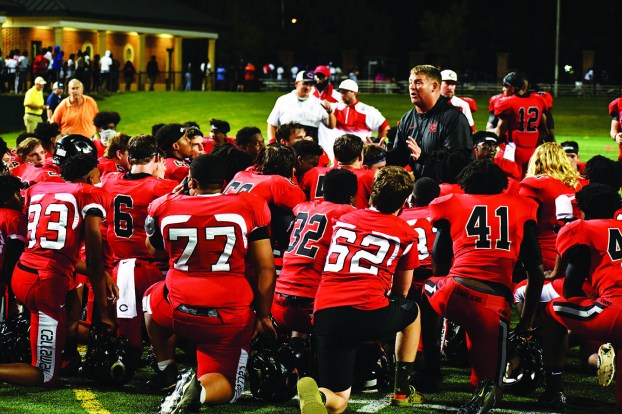 Plenty on the line for Cavaliers

It wasn’t a must-win situation for the Callaway Cavaliers, but they were nonetheless in desperate need of a victory when they traveled to Temple on Saturday night for a critical Region 5-AA showdown.

The Temple game came just four days after Callaway lost to Haralson County 36-29 to fall to 1-1 in Region 5-AA.

The game was tight in the fourth quarter, but Callaway pulled away late for a 41-20 victory to improve to 2-1 in the region heading into Friday’s showdown with Heard County that will wrap up the regular season.

Saturday’s win secured a state-playoff spot for the Cavaliers, and they’ll finish first or second in the region with a win over the Braves.

If Callaway loses to Heard County, it will finish third or fourth in the region and will be on the road for the opening round of the state playoffs.

Temple finished its season with a 1-3 region record, and it will miss the playoffs.

“Last week was a difficult stretch, playing Haralson on Tuesday, and we didn’t perform like we felt we should,”said Callaway head coach Pete Wiggins. “We made mistakes and came up short in that game. We turned around and played Temple, which has a really good football team, just like Haralson. Both teams are well-coached with good players. I was really proud of our kids for the execution, and just the mental toughness to go and compete against a really good football team in Temple Saturday night.”

Callaway can still win the region title, but it needs some help.

For Callaway to capture the championship, it needs to beat Heard County, and have Bremen beat Haralson County.

If Callaway loses to Heard County, it will be the region’s number three seed.

Regardless of what’s on the line, it’s always a high-stakes affair when Callaway and Heard County face off, and this year is no exception.

Either Callaway or Heard County has won every Region 5-AA title since 2016.

This is the third consecutive season Callaway and Heard County have played in the final game of the regular season with a region title on the line.

There’s also plenty at stake in the Bremen and Haralson County game.

While Bremen can’t win the region title, it can finish as high as second which would secure a home game in the state playoffs.

Haralson County, meanwhile, is in search of the first region title in the history of the program, but the team can also drop as low as fourth with a loss.

COLUMBUS – In a season that’s been like no other, the Troup Tigers find themselves in a familiar position. For... read more