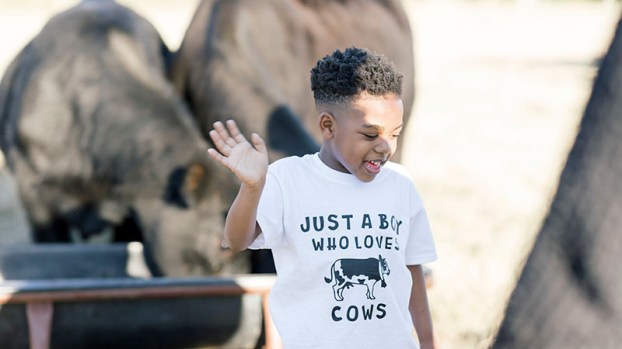 Above, Messiah Watson waves to cows in a pasture on Wednesday, where he was surprised for his sixth birthday by his teachers at Ethel Kight Elementary School.

Since Messiah Watson was little, he’s always had a love for farm animals, especially cows. For his sixth birthday, Ethel Kight Elementary School teachers Catherine Proctor, Maddie Elzey and Tiffany Allen wanted to surprise him with something special — cows.

Watson’s mom, Kelly Vines, said that he had never been close to a cow and had always admired them from the road or car.

“When we go to the dollar store and he wants to pick out a toy, it’s always the same thing,” Vines said. “He basically gets farm animals every time.”

Vines said they’ve taken him to a local zoo but when he saw there were no cows, Watson wasn’t as interested.

When Watson arrived on the farm, his eyes immediately darted toward the cows.

“You just can’t ask for a sweeter kid and more deserving child,” Proctor said. “He comes to school and works hard every single day. He’s grown so much this year already.”

Proctor said she wanted to do something special for him for his birthday and has always known how much he loves cows.

Watson not only got to look at the cows but was able to pet and feed them as well, smiling ear to ear.

Along with the cows, Watson visited with chickens, goats and dogs as his teachers and parents stood behind him soaking in the special moment.

“We found out Monday that they were planning this, and I just thought it was awesome,” Vines said. “To see that they love him so much, to do this for him, is amazing.”

For 21 years, Ivy Sears has been serving the suburbs of Stockbridge, Georgia in real-estate and now she’s coming back... read more