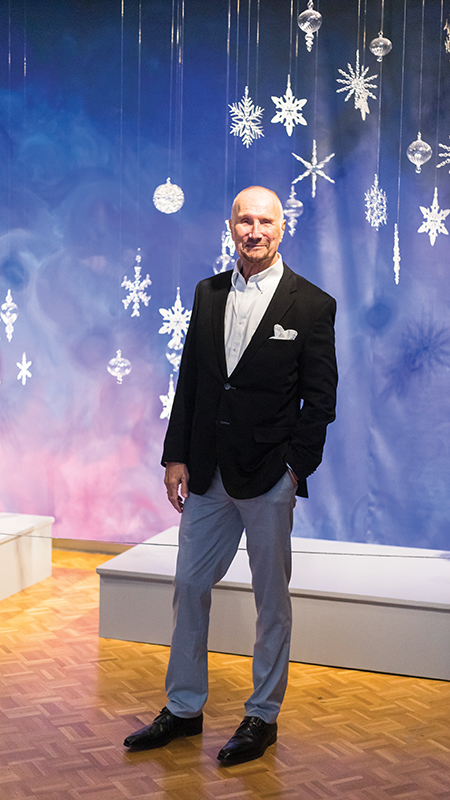 Glass sculptures of every shape and size were carefully and strategically placed inside the LaGrange Art Museum on Thursday.

Each art piece by Hans Godo Frabel was delicately cleaned with a Q-tip by employees to prepare for the debut Thursday night of the Frabel Glass exhibit.

“I think they did an outstanding job putting this all together,” Frabel said. “Things look 10 times better than in the studio.”

Frabel said each piece was wrapped and packed individually with coordinating numbers for the museum to assemble.

The works of the internationally renowned Frabel Studio are typically displayed at botanical gardens and conservatories.

“Remarkably, this is the studio’s first art museum exhibition, and we are thrilled to be the venue,” said Al Brannon, museum board president and the art enthusiast who advocated for this exhibition.

Brannon said he met Frabel years ago when they attended church together in Atlanta.

Frabel, who was born in Jena, East Germany in 1941, said he got his start in glass working when he was studying scientific glassblowing at Jena Glaswerke.

He said while studying glass blowing he took art classes at the Mainzer Kunstschule in Mainz, Germany.

“My father was an account at a glass factory,” Frabel said. “He said I had to take a three-year apprenticeship. I made laboratory instruments for research and scientific matters.”

When Frabel moved to the United States in 1965, he worked at the Georgia Institute of Technology in its scientific glass-blowing laboratory.

“In Germany, you had to work very fast and everything had to be perfect,” Frabel said. “So, when I (started) working in the US, I was always done by noon.”

Frabel said he would always get done with his work early so he started experimenting with making small trinkets with the glass.

He would make small crystal glass sculptures as gifts for friends, partners and business associates, inspiring him to become a full-time artist.

Over the next 52 years, he has followed the European tradition of apprentice and master. As the master artist, he passed his skills on to a handpicked group of apprentices and associates, who, after many years of training, became master artists in their own right.

He sells a majority of his glass sculptures out of his showroom in Atlanta or during art exhibits.

Laura Jennings, LaGrange Art Museum Executive Director, said this is one of their most fragile exhibits they’ve ever opened.

The exhibit will run from now until Jan. 9, 2021. Smaller pieces from the studio are available for purchase in the pop-up gift shop.

For more information, go to www.lagrangeartmuseum.org.

The Troup County School System voted Thursday to move forward with plans for roofs at two schools, though those projects... read more