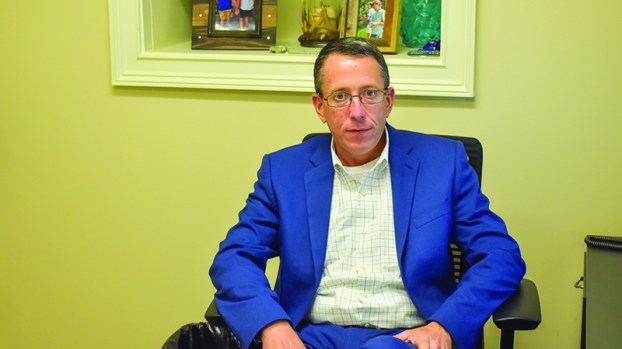 Above, Mark Kostial, a former police lieutenant who now works as a city planner for the City of LaGrange, sits in his office at City Hall.

After more than 24 years with the LaGrange Police Department, former Lt. Mark Kostial has left the force for a new job as a city planner at the City of LaGrange.

As a planner, Kostial hopes to work with other city staff to create development strategies as the city grows.

Kostial spent the past 15 years as a lieutenant. His oversight roles included working with shift sergeants, specialized units, the field training officer program and the traffic unit. He holds a bachelor’s degree in critical justice and a master of public administration.

“I knew that I wanted to stay with the city, and realizing that this job opportunity was out there, I took some time to research exactly what it entailed,” Kostial said. “Had some conversations with our city manager concerning that position, based upon her prior background as a city planner, and thought that this would be an excellent opportunity for me.”

Kostial said the transition has been “extremely smooth,” attributing that to his time with LPD, during which he collaborated with officials at City Hall, the Downtown Development Authority, LaGrange College and other places.

The city planner position has a wide range of duties but is focused on creating plans to spur population growth, revitalize facilities, upgrade infrastructure and designate land use. It differs from the community development department, which is more focused on permitting and enforcing zoning ordinances, he said.

“I actually sit down with developers and share with them what we have outlined by way of ordinance, and then through discussions with them and reviewing their plans, specifically identifying what they’re actually permitted to do, and what they would be prohibited from doing,” Kostial said.

Now, Kostial is helping the city redo its unified development ordinances, which Kostial said allows the city to anticipate what development LaGrange will see in the future, as well as what sort of development the community wants. Some of the things they’re examining are garage apartments, backyard cottages, cottage courts, walk-up flats and food trucks.

The latest city master plan, put in place in 2015, runs through 2035. Kostial stressed that those plans don’t sit on a shelf and collect dust but are regularly used as a guide.

The single biggest development challenge for LaGrange, he believes, is the lack of available housing inventory. Between 20,000 and 23,000 people commute 45 minutes or more to work in LaGrange, Kostial said.

“The real gap that we’re shooting to fill is really that middle-class, single-family housing,” he said.

While some residents may want more amenities and retail shopping, Kostial said that was putting the cart before the horse — retailers have to feel that LaGrange has a large enough consumer base to be a good investment.

“You have to have a population that will support that … once you get the housing population here and adequately addressed, then, historically speaking, your retail development follows,” Kostial said.

And while the city continues to grow, it has to strike a balancing act between development and preservation. Staff can make recommendations, Kostial said, but decisions over rezoning and other development issues are ultimately up to elected officials.

“It’s a beautiful community, you know, starting with our downtown, and then spreading out over the 40-plus square miles that make up the city … You have to be very intentional with what you do,” Kostial said.

Kostial moved to LaGrange in 1996 to take a job with LPD. Two years later he got married, and he and his wife have raised two sons here. In that time, he’s watched the city continue to grow. One asset he sees as underutilized is West Point Lake, but he also said that taking full advantage of the lake requires collaboration with Troup County and the Army Corps of Engineers.

To continue to grow, the city has to market itself effectively, he said. Kostial praised Visit LaGrange for its work to promote the city as a destination and a place to invest and live in.

“That’s what it comes down to is telling your story,” Kostial said. “We’ve got a lot of things here that we can be proud of. But, you know, a lot of folks haven’t heard of LaGrange, Georgia. But I think that you will see that begin to change.”

As temperatures drop below 40 and 30 degrees in LaGrange, the Warming Center has reopened its doors for the winter... read more