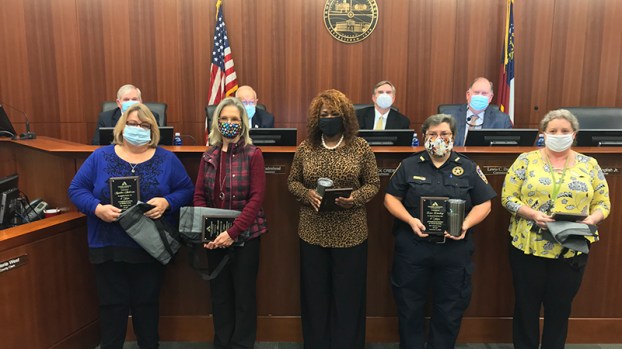 The Troup County Board of Commissioners awarded a contract for new exhaust removal systems at several fire stations at its Tuesday meeting.

A contract for about $265,000 was awarded to Clean Air Concepts of Cincinnati, Ohio, to provide the Troup County Fire Department with complete source capture exhaust systems for seven manned fire stations.

Clean Air Concepts’ bid for $264,699 was the only one that was received on time.

The exhaust systems will be paid for with a $245,454 Federal Emergency Management Agency award, coupled with a local match of $24,545.

The systems will be hooked up to fire trucks inside the fire stations and will remove harmful, carcinogenic diesel exhaust from the stations while the vehicles are idling.

“As soon as a sensor interprets that the engine has come on, it starts a fan and it pulls all the exhaust, all the particulates, everything outside and keeps it away from the living area, the gear that the guys wear on a daily basis, and keeps the building safer,” said TCFD Battalion Chief Michael Williams.

In other business, Skillet Kitchen, a division of Kimble’s Food by Design, came to the board to request a 3.1 percent increase in their price per plate based on the Consumer Price Index (CPI). Skillet Kitchen provides meals to inmates at the Troup County jail.

Representatives from the company mentioned price increases, scarcities or other problems with eggs, sandwich meat, ground beef and fresh-cut meats, due to the pandemic.

The company did not renegotiate its contract in the spring when the county was going through its budget process. The contract had automatically renewed with no price increase. County Attorney Jerry Willis also wasn’t sure if the contract should be renegotiated before the Board of Commissioners when confusion arose over what the recommendation of county staff was.

Commissioners agreed to postpone the matter until the next meeting.

Fourth quarter service awards were also given out at the meeting, with 14 employees recognized for their time working at the county. Five-year service awards were given to Cynthia Anderson, Kristopher Barnett, Lori Chesnutt, Margie Gantt, Robert Holcomb, Lisa Lindsey, Zack Phillips and Debra Trapp.

The Strongest Link Award, given monthly to a county employee who has demonstrated excellent performance and productivity, loyalty, professional pride and other noteworthy accomplishments,” was given to Elections and Registration Supervisor Andrew Harper.

“The last election that Andy and his staff conducted was one of the smoothest in Troup County since I’ve been on this board,” Crews said, praising the work of Harper and his staff. “I want to ensure the citizens that we haven’t found anything misleading.”