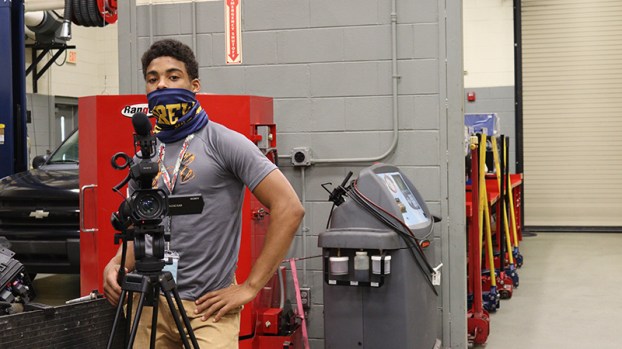 Students in Troup High School’s audio visual and film classes have been actively learning and growing their knowledge in film. Students have also been in the field making videos and commercials for school programs.

When AV teacher Kelton Hunt took over the program at the beginning of the year, he wanted to bring new ideas and projects to classes.

Hunt recently graduated from LaGrange College with a degree in music technology and composition.

He said one of the coolest series they’ve created is about  the teachers.

“It’s called Abstract, and it’s a series that focuses on a different teacher each week or so. We talk to them about their background, where they’re from and how they got into the field,” Hunt said. “We also talk about some of their hobbies, career stuff, things that they love and really the things that make them up as a teacher.”

Along with teachers, Hunt’s AV classes are also filming and working on a new podcast series called “Overtime” where students talk with coaches, who give an update or recap of recent games and practices.

The podcast is available on YouTube, Spotify and Apple. The class just created a major project spotlighting the Troup High Automotive Club after it finished as a top 20 finalist for Tomorrow’s Tech School of the Year.

Hunt said he handles a majority of the editing but shows the students his process and lets them do small cuts.

“This helps break up the work and shows too,” Hunt said. “A complete student-led video we did was of the new athletic facility. It ended up looking really good and everything worked out.”

Hunt said along with filming, students are also learning about lighting and composition.

“I am making sure they get their hands on the camera and have something to put in their portfolios,” Hunt said.

Hunt has also teamed up with Corey Faulkner, who owns CedarCross Media, to offer internships to the THS AV students.

“This new partnership will help our students have access to a professional audio visual and film production company that has been immensely successful in the industry,” Hunt said. “Students will be given true exposure into the business, industry standard equipment and skills, and even internships for those interested in pursuing a career in the field.”

Guest speakers are also offering insight to students who are learning about the field.

“I just really want the community to see our student’s work because they are working so hard over here,” Hunt said.

“One of the biggest things I’ve learned is having a side hustle is so important,” Hunt said. “I preach to them all the time that this is a viable career if they choose to pursue it. It is a billion-dollar industry for videography. This is why I have also pushed so hard for them to get internships.”

Hunt said this program isn’t relatively new for THS, but he has completely reprogrammed it so that students can get more hands-on work.

“One thing I wanted to do when I came in was to make sure that all of the equipment that they spent money on was being used and put to work,” Hunt said. “I really wanted it to be like a college program. One of the cool things about that is to create learning experiences. We take them out on real, actual professional experiences. Our biggest thing is to create.”

Students play a big role in coming up with new ideas.

“We always flesh it out on paper and make sure it works, and then we create and we go from there,” Hunt said. “That’s sort of been the basis of the program to make sure that we are seen as professional more than just a high school program. That’s how I treat it.”

For more information on the program and to catch up on the latest videos students are working on, go to the Troup Audio Visual and Film Facebook page @troupavandfilm.

During the year 2020, Hogansville saw new businesses open, projects begin and COVID-19 make its way through the city.  “We... read more