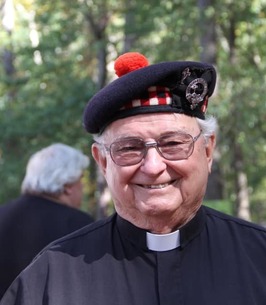 Son of CB and Margaret (Trimble) McCook of Lizella, Georgia, Frank was born July 20, 1927 in Macon. After graduating Macon’s Lanier Boys High School (’45), he was drafted in the army during the end of WWII. It was here he received his call to the ministry.

Upon completion of his military service, he began his career of academics, earning a bachelor’s degree from Emory University, followed by his Master of Divinity and PhD from Boston University School of Theology. While in Boston, he served at the Congregational Christian United Church of Christ in Stoneham and Belmont, Massachusetts. Moving his family back to Georgia, Frank served pastoral appointments in South Georgia including, UMC circuit pastor for Hagan, Georgia, Mulberry Street Methodist Church, Oak Grove Congregational Church UCC, Asbury UMC.

In 1961, Frank joined the faculty of LaGrange College where he remained for 33 years, serving as department chair of religion. During these years he assisted the college in creating a BA degree in Christian Education, devised a religion class specifically for nursing students, developed a summer study course where students studied in Israel, and initiated Project YES for North and South Georgia UMC Conferences to train college students for summer youth work. LaGrange College currently houses Frank’s collection of Israeli pottery.

Family and heritage were important to Frank. In the 1970s, he became a member of the Order of the Tartan and later served as the organization’s chaplain. He was also involved with Clan Donald USA where he became chaplain for the Georgia branch. In 1994, Frank was asked to become National Chaplain for Clan Donald USA; a position he held for 10 years. His ministry within the Scottish community also included serving as the chaplain of the Stone Mountain Highland Games for 20 years, providing spiritual guidance, christenings, worship services, and weddings.

Pastoring was always a part of Frank’s adult life and he continued pastoring churches, including Antioch UCC and North Main UCC – both in Roanoke – and Harmony UMC in LaGrange where he retired at age 90. His favorite text on which to preach was Isaiah 6:1-8. “Then I heard the voice of the Lord saying, ‘Whom shall I send? And who will go for us?’ And I said, ‘Here am I. Send me.’” (Isaiah 6:8)

Frank loved his family, his congregants, and his students. It was his students who gave him the endearing nickname of Froggy, which led to an impressive collection of frog figures. He was an accomplished prankster, hard to keep up with, grew the best corn, and could never be trusted near any dessert. If he was sitting down at home, be assured there was always a dog asleep in his lap.

Frank is preceded in death by his first wife Louise Wiseman McCook, and his parents CB and Margaret McCook.

Memorial donations may be made to the Dr. C. Frank McCook Scholarship Endowment Fund, payable to Georgia United Methodist Foundation, P.O. Box 922087, Peachtree Corners, Georgia, 30010-2087 (note Dr. McCook Scholarship in memo line). A celebration of Frank’s life will be held in the Spring.