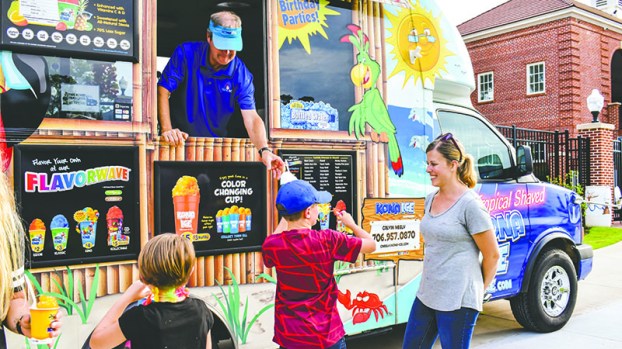 The first part of the ordinance carves out an exception for restaurants and event centers in the C-2 central business and C-3 general commercial zoning districts that allows them to operate food trucks on their own lots whenever they want, as long as they want.

The durational requirement itself, which still applies to other food trucks, will also change. Previously, trucks could stay for 10 consecutive days and then had to leave for 60 days. Under the new ordinance, they can stay for three days out of the week.

Durational requirements do not apply for events on public property sanctioned and approved by Downtown LaGrange or the Troup County Parks and Recreation Commission.

Mayor Jim Thornton expressed support, saying he “would love to do anything I can to encourage people in LaGrange to eat more vegetables.” He would like the Downtown Development Authority to be consulted however, as it could affect the weekend markets hosted by the DDA.

“We have the Niemen Marcus of produce in District 2,” Councilman Willie Edmondson said. “I mean, all the finest vegetables.”

The council agreed to address the produce vendors in a separate ordinance change in the near future.

Also at the work session, Thornton told council members that, following the deadly riot at the U.S. Capitol, he had asked the LaGrange Police Department to review security measures at City Hall and other buildings.

“In light of some of the recent events around the country, a couple of council members reached out to me about security assessment for city hall, for council meetings, etc.,” Thornton said. “And so, I have requested [LPD] Chief Dekmar to do a comprehensive threat assessment for all city properties.”

Thornton said the assessment could result in more security cameras, limited access or extra security personnel in the future. He hopes Dekmar and LPD could present to the council at its Jan. 26 meeting.

In other business, the council held a public hearing and first reading for a proposal to annex and zone property at 71 Busch Drive. Wild Leap Brewing Co. wants the property to be annexed into the city and plans to use the property as a warehouse. Nobody spoke in favor or against the proposal.

A public hearing was set for Feb. 9 to consider rezoning property at 111 and 115 Fort Drive from R-3 residential to C-3, to be used as a warehouse.

The council established qualifying fees for the November municipal elections. The mayor’s seat, as well as the seats held by Gaskin, Tom Gore and Jim Arrington, will be on the ballot. To run for city council, the qualifying fee is $288. For the mayoral election, it will be $360.

Finally, the council approved a host of board and agency appointments. Tom Gore was elected Mayor Pro Tem for 2021, succeeding Nathan Gaskin. The council has had an informal policy of rotating the Mayor Pro Tem role among all members for several years.

Every appointee wished to be reappointed, and all were approved. They were:

Every day is a picture when you dress your kids in KCo. clothing. For years, Cherrell Jackson looked for clothes... read more