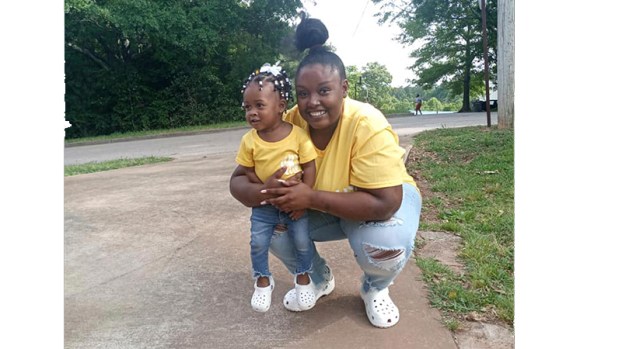 After losing everything in an apartment fire at Wood Glen Apartments this past weekend, the community has helped raised thousands of dollars for Jayvianna Hurston and her two-year-old daughter.

Hurston has been staying in a hotel since the fire but said she is looking for a more permanent housing solution.

Recently, Hurston said the apartment complex had given her a notice of eviction after the fire, but said the staff moved everyone else in the building into a new apartment.

The LaGrange Daily News reached out to Wood Glen Apartments for a comment and was hung up on.

The LDN made several additional phone calls to Wood Glen Apartments but has not received a return call, despite leaving several messages.

The LDN also called Wood Glenn Partners LTD, which is listed on property records as owning Wood Glen Apartments, but has not received a return phone call.

“The management office refuses to give me any of my paperwork so I can apply and prove to a new housing complex I was on fixed income housing,” Hurston said. “All the copies I had burned in the fire. When they were answering my calls, all they would do is yell at me and tell me the fire was my fault and that the fire department said I was to blame.”

According to the LaGrange Fire Department, the fire is still under investigation and no cause has been determined.

Hurston said this is not the first time she’s had an issue with the management.

“I’ve asked them several times to fix my heat, door and fire alarms, and they never would,” Hurston said. “The night of the fire I was asleep in my living room with my daughter because there was no heat in the bedrooms. The smoke alarm never went off, and it hasn’t worked in a while. The front door gets jammed a lot and when I grabbed my daughter to get out of the apartment, the door wouldn’t budge at first. I was scared for our lives we would be stuck in there.”

Hurston said she had put in requests multiple times to get things fixed in her apartment, including mold, but said maintenance never came by during her time staying there.

She said with donations she has enough to pay for a few extra nights in the hotel, but she would rather use that money for a deposit for a new apartment.

“My daughter is having to stay in this hotel and a hotel room is no place to raise a daughter,” Hurston said. “I just want my paperwork from the apartments, so I can have somewhere to stay. I don’t want us to be homeless.”