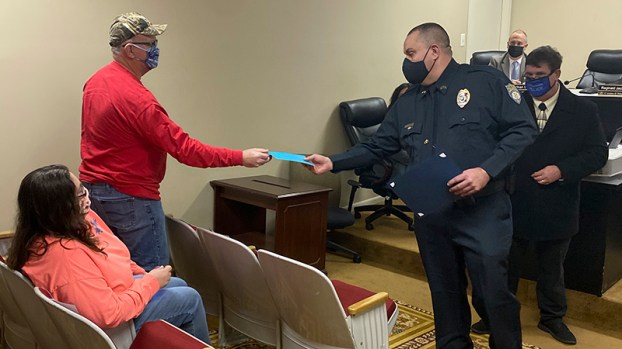 Above, Joel Powell, the man who Cpl. Vincent saved, hands the officer an envelope at Hogansville City Hall during the City Council meeting on Tuesday night.

In December, Hogansville police Corporal James Vincent used his training in a dire situation to save the life of a resident who was bleeding profusely from their hand.

During Tuesday’s council meeting, Vincent was honored for the life-saving measures he took that night.

“The Hogansville Police Department believes in the recognition of officers, their actions and their outstanding efforts to the community and their fellow officers,” said Interim Police Chief Jeff Sheppard.

“In keeping with this belief, the city of Hogansville and the Hogansville Police Department recognizes Corporal James Vincent for his outstanding efforts that occurred on Dec. 22, 2020.”

That night, Vincent was flagged down by a citizen while patrolling the streets.

Powell said the hospital told him that if it wasn’t for the tourniquet and Vincent’s actions, he would not have made it.

Vincent received a life-saving award Tuesday night and was pinned with the official life saving bar by Sheppard.

Powell said this was not the first-time Vincent had helped his family out.

“One night at 3 a.m. he was beating on my window to tell me there was a fire in my backyard,” Powell said.

“My heating lamp had caught the chickens on fire. It if it had not been for him, my whole barn would have burnt down.”

Powell said the fire and his injury had happened within a matter of a week.

“We are very blessed to have you,” said City Councilwoman Mandy Neese.

Troup County will have its third mowing contractor in less than a year after commissioners approved a new contract with... read more