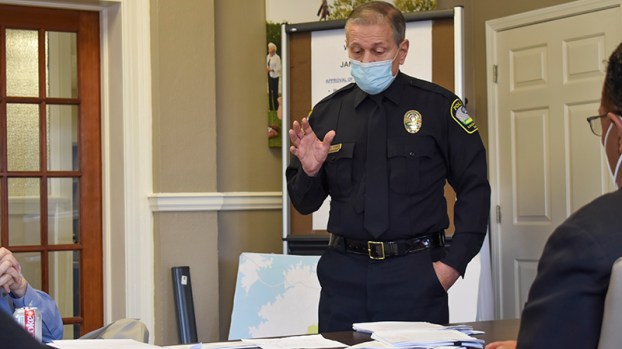 Above, Chief Lou Dekmar speaks to council members about the homicides that occurred last year in LaGrange at the council’s Tuesday work session.

The LaGrange City Council approved four funding requests to address violence in the city Tuesday night, allocating more than $40,000 to crime prevention community groups and increasing funding for the district attorney’s office by $25,000. The council also approved the hiring of five more LaGrange Police Department officers, which would increase LPD’s authorized capacity from 91 officers to 96.

The decisions were not unanimous, a rarity for the council. Councilman Mark Mitchell voted against allocating funds to one of the community groups, Greater Achievement – Blueprint for Leadership, because of Facebook posts by the group’s founder that offended him. Councilman Nathan Gaskin voted against increasing funding to the DA’s office because he disapproves of their handling of gang prosecutions.

The cost of five new officers may not affect this fiscal year’s budget, as the process of assessment, training and hiring takes several months. LPD already has four vacancies, with a force of 87 officers. With the approval to hire five more officers, LPD would need to hire nine officers to reach its new capacity of 96. According to LPD Chief Lou Dekmar, the cost of one entry-level officer, including benefits, is about $58,500 per year.

At the council’s Tuesday morning work session, officials agreed the level of violence in the city was disturbing. There were seven murders in the city last year — the highest since 1997, Dekmar told council members. Violent crime overall did not increase, however. Mayor Jim Thornton also pointed out that this trend was not unique to LaGrange, and that 2020 saw high rates of homicide across the country.

Dekmar blamed last year’s homicide rate mainly on the court system and state parole boards, saying they were releasing people prematurely on parole, probation or bond. He said most homicide suspects and victims in 2020 were people with long rap sheets, mentioning people who had been arrested 21, 27, 33 or 38 times.

“With the exception of, I believe one incident, individuals are on felony probation, [have] multiple arrests or on are parole or out on bond,” Dekmar said.

Too many violent offenders are being released because courts and parole boards want to reduce the jail population amid COVID-19, Dekmar believes. The backup of court cases and the suspension of jury trials is also contributing, he said.

“Our department, and we personally, have been involved in alternatives to incarceration, second chances,” Dekmar said. “But there’s a big difference between second chances and 21 chances, 33 chances.”

Thornton pointed out the mayor and council have no power to influence the probation and parole systems but discussed a potential resolution condemning violence and asking the courts and parole boards to reconsider their protocols.

A resolution did not come before the council Tuesday night but may be considered in the future. Gaskin insisted at the meeting that the resolution include references to genocide. Gaskin believes the high number of young black men being killed in the shootings constitutes genocide under the United Nations definition.

“We’re funding anti-genocide programs all throughout the world. And I think that we need to reach out to the UN to get some of that funding right here in our own backyard,” he said.

Under the UN Convention on the Prevention and Punishment of the Crime of Genocide, genocide is defined as “any of the following acts committed with intent to destroy, in whole or in part, a national, ethnic, racial or religious group, as such:

(a) Killing members of the group;

(b) Causing serious bodily or mental harm to members of the group;

(c) Deliberately inflicting on the group conditions of life calculated to bring about its physical destruction in whole or in part;

(d) Imposing measures intended to prevent births within the group;

(e) Forcibly transferring children of the group to another group.”

Dekmar told Gaskin it would “be very difficult for me to characterize what I deal with as genocide,” and that seeking funding from the United Nations was not practical.

Thornton said the council shouldn’t get bogged down in semantics.

“I want the council to recognize that, whatever you call it, we’ve got a problem,” Thornton said.

One of two groups that presented at the work session was a new, LaGrange chapter of the Alternatives to Violence Project. Founders Teara Harris of Communities of Tomorrow, Inc., and Lee Jones of Inspire Positivity, Inc., said their groups were joining forces to prevent youth and young adult violence by stimulating private sector investment in fundraising and prevention, fostering youth involvement and leadership and improving media exposure and coverage of city and county prevention initiatives. The group plans to focus on the Calumet Park, Thomastown, Hillside, Bell Line and Three Points communities and is a chapter of the Alternatives to Violence Project in Atlanta.

Funding for the group was approved unanimously.

Glenn Dowell of Greater Achievement spoke at the work session to request funding. The organization, he said, is more than 30 years old and mostly focuses on education, such as improving SAT and ACT scores and getting students into college.

Dowell said his group already works with more than 330 Troup students and said its work has helped improve graduation rates in the county and steer youth away from drug use and gang violence. It also does work in Atlanta.

Councilman Mark Mitchell asked Dekmar if he had done a background investigation into Dowell. Dekmar said he doesn’t do background checks on community partners, but that he has worked with Dowell for 25 years and found his group to be effective.

Mitchell then held up his cell phone and said, “He calls you and your police officers terrorists.”

A back-and-forth ensued which at times devolved into a shouting match between Mitchell and Dowell.

“This is not the person we need to give the city taxpayers’ money to. If you’re going to put this kind of garbage on Facebook, for everybody to see, we don’t need your help, go back to Atlanta,” Mitchell said.

Dowell said he was “not going to kiss anyone’s behind here for a few dollars … I won’t allow you or anyone else to insult me.”

The topic of Dowell’s Facebook page came up again later at the meeting Tuesday night.

“While I may not agree with a person’s view, politically, or how one views another, I deal with facts. And I look at the ability of an individual to do an effective job. I discovered that the article that was presented to us today had nothing in it that refers to the police department or any other police department as terrorists,” said Councilman Willie Edmondson.

The Facebook post in question was a link to a column Dowell had written in which he said that white mass shooters are painted as victims of mental illness, while a black mass shooter was labeled a terrorist.

Accompanying the article was a political cartoon from a different newspaper depicting a police officer and a Black Lives Matter protester back to back in front of a target, with the caption “Common Ground.”

“That in itself is inflammatory toward police officers,” Mitchell said to Edmondson, adding that regardless of the column’s details, there were “multiple inflammatory remarks” on Dowell’s Facebook page.

“This reflects on his thinking,” Mitchell said. “And if he’s going to be teaching these kids inflammatory things, why do we need that?”

Gaskin said that he supported Dowell’s work but criticized him.

“As a leader in this community, to make foolish statements on Facebook, like some sort of child, I take issue to,” Gaskin said.

Councilman Jim Arrington said he agreed with both sides of the issue but that it would be wrong to “sit back and do nothing” by rejecting the funding request. He also cited Dekmar’s vouching for Dowell’s effectiveness.

The funds were approved 5-1 with Mitchell opposed. They will be paid on a monthly basis. Gaskin said that if the Facebook posts continued to be an issue, the council should consider cutting off funding.

On the topic of funding for the DA’s office, Gaskin said he asked for but did not receive a list of vetted gang members from the DA and LPD.

“I know we need to do something to curb the violence. But keeping secret lists of black men and women in this community is not one of them,” he said.

The funding was approved 5-1, with Gaskin opposed.

Sheridan Construction of Macon, Georgia, acquired Benchmark Contracting of LaGrange to offer growth to its clients and employees into the... read more