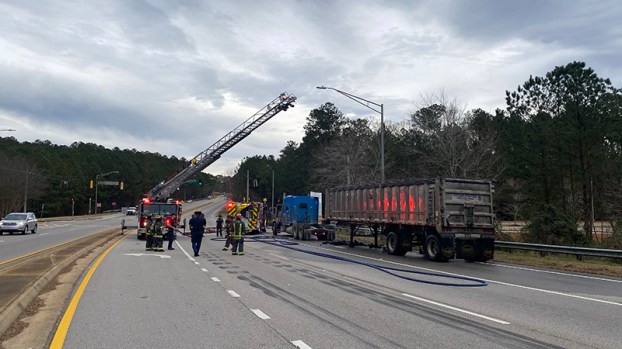 In a collaborative effort on Friday, the LaGrange Fire Department extinguished a truck carrying 43,000 pounds of burning coal while the Troup County Fire Department tackled the roadside fires the truck caused.

According to LFD Chief John Brant, the coal truck was hauling coal from Birmingham and when it hit Roanoke, Alabama, the coal started smoldering and falling off the truck.

No one was injured during the incident nor were any buildings impacted or damaged from the fires.

Brant said it was all grassy areas that caught fire.

He noted that coal trucks are typically loaded with cold coal or cooled down before driving off.

He noted in this truck the coal was not completely cooled when it left the facility in Birmingham.

Troup County Sheriff’s Office Sgt. Stewart Smith said the truck stopped near Vernon Woods Drive when he intercepted it after 5 p.m. LFD then immediately began to dump water onto the truck. Shortly after all coal and the truck was extinguished.